It’s the only turbocharged car here – does that boost Corsa’s victory chances? 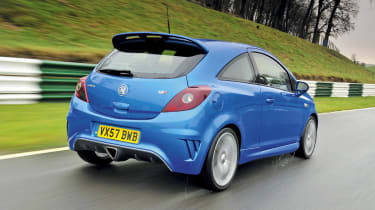 Hot hatch styling is a difficult balancing act, because the line between tastefully sporty and boy racer is so fine. And while opinions are often divided about which side the Corsa VXR comes down on, there’s no doubt the Vauxhall is the most brash of our trio.

The triangular centre exhaust, race-style mirrors and front foglights are far from subtle, while the bulging bumpers scream about the VXR’s sporting intentions. When parked next to the Fiesta and Clio, though, it looks strangely bulbous and heavy.

But that is an illusion, because despite making no claims to be a ‘stripped-to-the-bone’ race-bred car along the lines of the Clio Cup, the VXR is a mere 3kg heavier than the Renault. And that’s surprising, given that the Vauxhall’s cabin is packed with more luxuries than its rivals.

The modern dashboard design is carried over from the standard supermini and, with expensive-looking piano-black trim, it feels more upmarket than the layouts in either the Ford or Renault. Yet thanks to small audio controls and low-set climate buttons, the Corsa’s dash is probably the most difficult to get on with. Some compensation comes from the decent driving position – there’s plenty of steering wheel adjustment, and the excellent Recaro seats are standard fit, whereas they’re optional extras in the Renault and Ford. The VXR’s chairs can be altered for height, which is a further benefit. But whatever position the driver chooses, the Vauxhall’s angled A-pillars restrict visibility and cause nasty blind spots.

The VXR holds a power advantage over its rivals, though. Its 1.6-litre turbocharged unit produces 189bhp – the most ever offered by a Corsa. That pips the Fiesta’s 182bhp, and while it’s 5bhp down on the Clio Cup, it has 15Nm more torque, at 230Nm.

What sets the Vauxhall apart in this company is how that grunt is transmitted. Peak torque arrives at only 1,980rpm, so while the normally aspirated competition needs to be worked hard, the Vauxhall delivers its power in a low-down and punchy manner.

On the road, the result is excellent in-gear performance, although purists might prefer the more rev-happy nature of the Renault or Ford. That’s especially the case on the track, where it’s more natural to keep the revs high. And in that situation, the Vauxhall isn’t quite as easy to use. Due to the sudden power delivery, the traction control has to work more in the Corsa than in rivals, and it pulls the car from side-to-side under hard acceleration. While Vauxhall has done a great job of turning the Corsa into a hot hatch, the VXR never feels as truly involving as either the Renault or Ford.

The steering is impressively sharp, turn-in is very positive and there’s excellent body control. But it bounces on its dampers slightly and doesn’t have the mid-corner poise exhibited by its opponents. On the track, it feels nose-heavy and will understeer earlier than the other two models, while the stability control is more intrusive, too.

However, the VXR is far more refined and user-friendly than either rival. One real surprise is how capable it is on the motorway, as it feels stable and composed where the high-revving Fiesta and Clio buzz and bounce over every surface imperfection.

So the Corsa is a very capable road car, has a high-quality cabin and offers the punchiest performance here. But it’s simply not as involving as its more focused rivals.

Price: £15,825Model tested: Vauxhall Corsa VXRChart position: 3WHY: With aggressive styling and a big power output, the VXR is one of the hottest models available.

With its turbo engine, the Vauxhall doesn’t need to be worked as hard to generate performance. And this is why it was the most frugal car, averaging 31.2mpg. What’s more, it goes 396 miles on a tank of fuel – nearly 140 miles further than the Fiesta

the Vauxhall is expected to lose slightly more of its list price than the Clio, as it has a retained value of 44.4 per cent. But as it costs more to buy in the first place, the VXR will still be worth £7,026 after three years of ownership

As it has a small-capacity turbo engine, the Vauxhall puts out less CO2 than the Renault. The VXR emits 190g/km and sits in the 25 per cent bracket. But thanks to its higher list price, it’s £12 a year more expensive as a company car, at £870.

A host of factors goes towards deciding insurance groups: cost of repair, desirability to thieves, power, standard kit and safety standards are all considered. Clearly, assessors believe the Group 16 VXR is a higher risk than the Clio Cup