Everyone loves the Ford Fiesta ST hot hatch but how will they feel about the toned-down ST-Line versions? 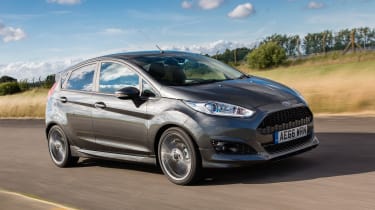 The Ford Fiesta ST-Line is the new name for the Zetec S. That means you get the look of the full-fat Fiesta ST without the high running costs and the firm ride. As an everyday sporty hatchback, the Fiesta ST-Line is a superb companion – perhaps even the pick of the range – but with a starting price of £16,295 it doesn’t come cheap.

The Ford Fiesta Zetec S has been a long-time favourite of buyers looking for a sporty drive without the running costs associated with the top-spec ST hot hatch. As part of some trim rationalisation, the Zetec S has been replaced by this – the all-new ST-Line.

Think of it as a Fiesta ST-lite and you won’t go far wrong. The styling is so close to the ST, only the most hardened Ford fans could tell them apart. It’s a similar story inside too.

But it only takes a short drive to tell it’s a very different machine. What you’ll notice at all speeds is that while the ST-Line has sports suspension, it’s far more pliant than an ST. It’s firmer than Zetec or Titanium models, but could never be described as uncomfortable. 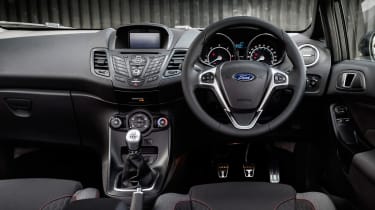 This makes it more fun than those base models on a winding country road, too, where it displays good body control and agility. But you don’t feel every bump and ripple in the tarmac as you would in a full-bore ST.

The ST-Line range comprises of three 1.0-litre EcoBoost models, producing either 99bhp, 123bhp or 138bhp, as well as a 94bhp 1.5-litre TDCi diesel. We tested the most powerful EcoBoost engine, which – like in other versions of the Fiesta – is a stellar performer.

You’re well isolated from the usual three-cylinder vibrations, and at low speeds the engine is quiet. Wind it past 4,000rpm and the engine makes itself heard, although it’s more characterful than irritating. There’s also an overboost function that sends torque from 180 to 210Nm for short periods.

With peak torque coming in at 6,000rpm, it’s easy to end up pushing the engine hard through the precise five-speed manual gearbox. It lacks the sixth ratio you’ll find in the ST and ST200, which can prove tiresome on longer motorway journeys. 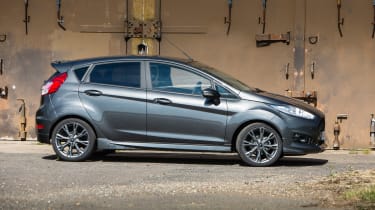 Our test car was fitted with a range of options including heated front seats (£175) and Ford’s Navigation System (£400), but out of the box it comes well equipped. Standard kit includes sports seats, a Quickclear heated windscreen, air-con and a DAB radio with a 4.2in screen, SYNC and Bluetooth connectivity.