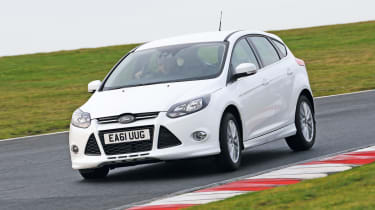 The Ford Focus Zetec S sits somewhere between the mid-range Focus Zetec and the range-topping Focus Titanium X Navigator models.The smallest Ford Focus Zetec S is powered by the excellent, 1.0-litre turbocharged EcoBoost petrol engine which produces 123bhp and is fitted with a six-speed manual or automatic gearbox.Ford's three-cylinder EcoBoost engine suits the Focus Zetec S very well, and it returns a respectable 56.5mpg with a combined cycle of 114g/km. There's also the option of a 123bhp 1.6-litre petrol, which returns 44.8mpg and emits 146g/km of CO2.There's also a more powerful 1.6-litre petrol EcoBoost engine that turns the Focus Zetec S into a warm hatch, ready to take on the SEAT Leon FR and Volkswagen Golf GT. This engine produces 179bhp, with economy of 47.9mpg and emissions of 137g/km of CO2.Those who want their Focus Zetec S with diesel power can choose between a 1.6-litre TDCi or a 2.0-litre unit, and both can be chosen with an automatic gearbox.Apart from the Ford Focus ST, the Zetec S is the sportiest looking car in the Focus range, you get a bodykit that includes a low chin spoiler and ground-hugging skirts at the back. It also gets a set of multispoke alloy wheels and LED tail-lamps as part of the package.Inside, however, the Zetec S is pretty much a standard Ford Focus. Everything feels well screwed together, but there are too many buttons and we wish the sat-nav screen was a bit bigger. In fact, the only thing that sets the Zetec S apart from lesser models is its sporty cowled dials, blue trip computer screen, sports pedals, sports seats and a push-button start.However, Ford does give the Focus Zetec S a host of fuel-saving technologies, which include stop-start, a gearshift indicator, a flap that closes to improve aerodynamics and regenerative battery charging.While the Ford Focus Zetec S may now feel a little long in the tooth when compared to similar cars from Volkswagen or SEAT, it still remains a very nimble car to drive. Ford specifically designed its suspension with UK roads in mind and while it has firmer dampers and stiffened springs than a standard Focus, the Zetec S soaks up bumps at speed and filters out small town-driving imperfections.The Focus Zetec S really shines down country roads, and is much more engaging, comfortable and confidence-inspiring than its rivals from the Volkswagen Group.The suspension tweaks have undoubtedly helped make the Focus even better to drive, but the fact remains that it is simply a great drivers car. The electric power-steering is perfectly weighted and the gearshift is slick, plus the brakes have the perfect mix of stopping power and sensitivity.Ford has worked hard to make the Focus one of the safest cars in the family hatchback class, and the Zetec S is no exception. It received a five-star Euro NCAP rating, and features six airbags and ESP as standard. What's more, you get handy extras such as heated mirrors and a Quickclear heated windscreen.