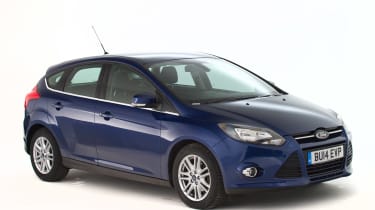 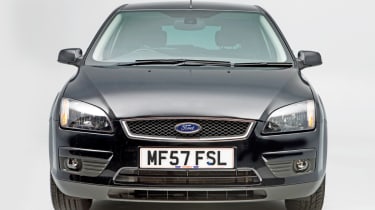 The original Ford Focus was such a landmark car that replacing it was always going to be tough. The Mk1 was one of the most practical hatchbacks available yet great fun to drive, and a giant among small family cars.

But when Ford did introduce a new Focus in 2004, it retained its predecessor’s best attributes, with improved cabin quality, a sleeker design and an even better drive. As one of the UK’s biggest sellers, the Focus is also plentiful, so it’s even more tempting as there are loads to go round – and buying one won’t break the bank.

From September 2005, the Focus ST packed a 221bhp 2.5-litre engine, and came with three or five doors and three trim levels. A heavily revised, facelifted Focus emerged in September 2007, with sharper looks and an upgraded interior plus a 127g/km 1.6 TDCi ECOnetic option. By February 2010, this had been cut to 99g/km by fitting stop-start and other tech.

The best engines are the TDCi diesel units; all are good, including the entry-level 1.6 – but be wary of cars with diesel particulate filters if you’re a low-mileage driver. 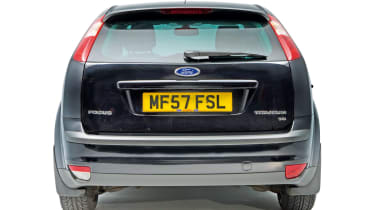 We’d go for Zetec, Ghia or Titanium trim; entry-level models are not especially well equipped. Zetec didn’t always get air-con, so if that’s important to you, choose a Zetec Climate, which also brings a heated windscreen.

Alternatives to the Ford Focus Mk2

The Mazda 3 is related to the Focus and offers similar attributes, as it’s well built and great to drive, but less common. Other cars worth looking at include the Toyota Auris and post-2004 Honda Civic, both of which major on reliability, although some early examples of the latter aren’t so well built.

The Hyundai i30 won the 2010 Driver Power survey, so it’s one of the best all-rounders out there. Its crown has long since slipped, but it’s still a superb used buy. The VW Golf, meanwhile, is the small family hatch with everything – including much higher asking prices than for an equivalent Focus.

All Focuses have two minor services followed by a major. Only the 1.6 Ti-VCT engine (that’s the one rated at 113bhp) has a cambelt; all the rest have chains. A new belt for this unit is needed every 100,000 miles or 10 years. 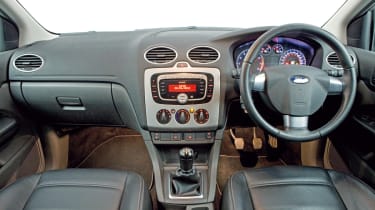 The brake fluid has to be replaced every two years, while the coolant and air-con have to be checked every service, and topped up if needed.

Diesels have a dual-mass flywheel, which can fail after only 30,000 miles if frequently used in stop-start driving.

Estates can leak because of poor sealing around the tailgate hinges; check for water in the load bay.

Diesels revert to limp-home mode when the intercooler pipe cracks or through throttle butterfly faults. 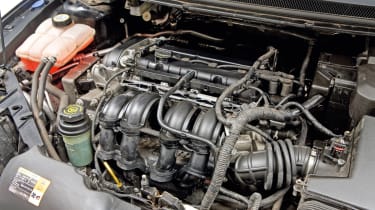 A tally of 16 recalls won’t inspire confidence, although three relate to the coupe-cabrio only. Also, some focus on specific models, such as the 1.6 or 2.0 TDCi. Potential glitches include leaking fuel pipes, overheating wiper motors and loose rear hub bolts, along with the cooling system (the electric fan could fail), power-steering leaks and brake servo failure. The last four recalls, issued between August 2010-November 2012, were due to the cooling fan potentially overheating and catching fire.

The Focus was the overall winner in our 2007 Used Car Awards, and the reasons for its success are still applicable. We loved its interior, engines and chassis, plus its affordability and practicality – and we still do. The fact there are so many to choose from only makes it easier to recommend the Focus, although you’ll never stand out from the crowd in one. Best of all are the revised cars from late 2007. These are available from only £4,500, and offer concrete proof that you can have a brilliant family car even if your pockets aren’t deep.