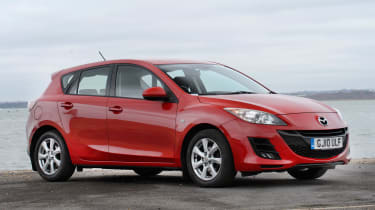 When the all-new second-generation 3 arrived we said: “The driving experience is great, and the sprightly chassis and impressive engines give the Focus and Golf a run for their money. To be a hit in the cut-throat hatch market, a car needs to be a great all-rounder, and the 3 is that.” But you don’t have to take our word for it, as there are more than 800 Mazda 3 owner reviews on our sister Carbuyer website, with the average score 4.3 out of 5. If that’s not a ringing endorsement of this sharply styled hatch, we don’t know what is.

The small family hatchback segment is one of the most popular across Europe, so it’s no surprise that many car makers are terrified of taking a risk that might backfire.

The sector is awash with models, many of which are worthy but ultimately uninspiring. But Mazda has never been afraid to take a gamble, and while it’s rarely been rewarded with a best seller as a result, for those who want something a bit different, the Japanese brand has plenty to offer. That’s definitely the case with the Mazda 3, with its smart looks, excellent handling and generous equipment levels, and with prices starting at just £3,000, it’s eminently affordable, too. 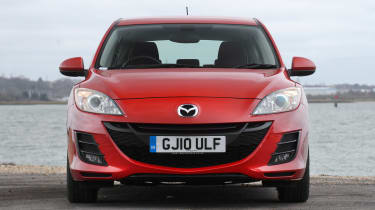 Mazda’s original 3 arrived in December 2003; by May 2009 there was an all-new model. There were four-door saloons or five-door hatchbacks in S, TS, TS2 or Sport trims, with 1.6-litre petrol or diesel engines, a 2.0-litre petrol or 2.2 diesel, the latter in 148bhp or 182bhp forms. For power junkies there was a 256bhp 2.3-litre petrol option in the MPS. The Tamura and Takuya special editions arrived in 2010, then for spring 2012 there was a facelifted car on sale, with a reprofiled nose, improved refinement and extra standard equipment. The steering was also improved, and two new trim levels were introduced: the Sport and Sport Nav, the latter featuring standard navigation.

None of the mainstream models is poor, but the pick of the bunch is the muscular and frugal 2.2D, especially in 182bhp form. 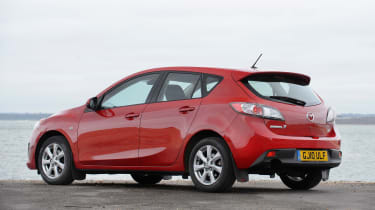 We’d avoid the MPS because there are much better hot hatches out there. Saloons can be hard to sell on and so can autos, which were never available in diesel form. Even entry-level cars feature air-con, electric front windows and mirrors and remote central locking as standard. The TS also has dual-zone climate control, alloy wheels and powered rear windows. The TS2 comes with a heated windscreen, cruise control and automatic lights and wipers, while the Sport features heated front bucket seats, sat-nav, rear parking sensors and an upgraded hi-fi.

Alternatives to the Mazda 3 Mk2

Small family hatchbacks are big sellers, so you’re spoiled for choice. A winner in terms of value, choice, driving pleasure and availability is the Ford Focus, but we’re also fans of the SEAT Leon, which looks stylish, is well built plus is also good to drive.

The Vauxhall Astra is pretty much unbeatable for the value it offers, although it’s not especially inspiring otherwise. The Honda Civic is big on practicality while the Toyota Auris offers class-leading reliability, but when it comes to all-rounders it’s hard to top the Volkswagen Golf, although prices are high. You get plenty for your money with the Peugeot 308, which is another multi-talented contender – and put the Kia Cee’d on your shortlist, too.

Some owners have found that while the headlamps are great on main beam, they’re poor when dipped. Upgraded bulbs don’t help the situation. 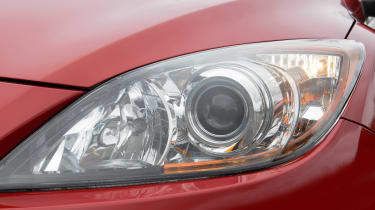 The rubber boot button can dry out and crack – which is usually barely perceptible – but this could allow water in, leading to some reliability issues.

Some owners have reported problems with getting their car’s Bluetooth system to talk to their phone. Dealers can update the software, though.

The front seats are not as supportive as they could be, which is why some high-mileage drivers can suffer backache after a long journey.

With excellent build quality and supportive seats, the cabin is a nice place to be in the front. But rear headroom is compromised by the sloping roofline, and some owners find the slightly offset driving position awkward. Boot space is average at 340 litres, or 1,360 litres with the seats folded. 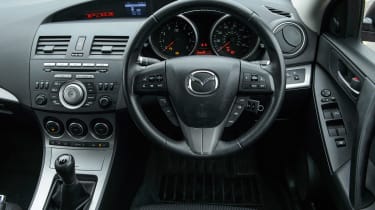 All engines have a timing chain except the 1.6D, which has a belt that should be replaced every 10 years or 125,000 miles, at £655 including a full service. Other scheduled maintenance includes fresh brake fluid every two years or 25,000 miles, at £55.

The original Mazda 3 was involved in five recalls, with potential problems including failed engine mountings, failing wiper motors and the ECU telling the engine to over-rev. The second-generation car has so far been the subject of just one recall, issued in October 2014, due to the stop/start system not working properly.

The Mazda 3 came 138th in our Driver Power 2016 survey, which isn’t terrible for such an old design. The only top 100 scores were for reliability (83rd), practicality (87th) and build quality (99th). One of the worst ratings was for running costs; 137th for this and 146th for ease of driving are disappointing.