Good to drive and beautifully built, the Mazda 3 is a good alternative to the VW Golf or Ford Focus 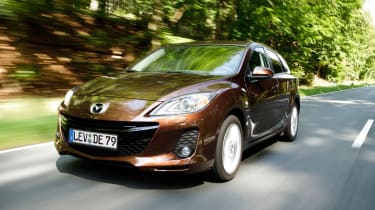 If you're looking for a small family hatchback that's fun to drive, then the Mazda 3 is well worth investigating. It's relatively spacious, incredibly well equipped and offers a level of agility that's unmatched by many of its rivals, which include the VW Golf, Ford Focus and Vauxhall Astra. The Mazda 3 is only available as a five-door hatchback, but a high-performance MPS version is also offered and is marked out by a big bonnet scoop, gunmetal grey 18-inch alloy wheels and gloss black trim on the roof spoiler. It’s powered by a 256bhp 2.3-litre turbocharged petrol engine, which drives the front wheels via a six-speed manual gearbox. The Mazda 3 was facelifted in 2012, but an all-new model has already been spotted with a new Mazda 6-inspired front-end, featuring sharp headlights and a large ‘shield’ grille. It will be built using the manufacturer’s SkyActiv technology, which aims to cut as much weight as possible, while also improving efficiency.

Like all Mazdas, this is the 3's biggest strength. The light and accurate steering makes it feel very nimble, especially on winding roads, while an electro-hydraulic set-up offers a reasonable degree of feel and sharp responses, too. There's very little body roll and if you hit a mid corner bump, the car's solid suspension set-up means the car feels very stable. Even the entry-level 1.6-litre petrol engine feels quite sporty, with decent in-gear performance. The diesel line-up kicks off with a frugal 1.6-litre engine with 113bhp. There’s also smooth 148bhp 2.2-litre turbodiesel and an 182bhp version of the same unit, which is capable of accelerating from 0-62mph in 8.2 seconds and offers plenty of mid-range shove, too. The manual gearbox has a smooth action for slick changes, but the dated four-speed automatic is best avoided. A word of warning, though: while lesser versions of the 3 make great drivers' cars, it's ironic that the sportiest model is no class leader. The 256bhp 3 MPS is very powerful but lacks the finesse of rivals like the VW Golf GTI – it’s very thirsty, too.

The most efficient Mazda 3 you can buy is the 1.6-litre diesel, which offers fuel economy of 65.7mpg. CO2 emissions are only 115g/km, meaning road tax is free for the first year of ownership and £30 a year thereafter. The powerful 2.2-litre diesel can return 52.3mpg and emit only 144g/km of CO2, while the 2.0-litre petrol offers average economy of 42mpg. But the story is very different for the 3 MPS - that can only manage 30.1mpg and emits 219g/km of CO2, which makes it 9mpg less efficient than the Ford Focus ST, for example. So as long as you steer clear of top-spec cars, the Mazda looks like good value for money, but watch out for steep depreciation. The experts predict it could lose up to 40 per cent of its value in three years.

Although the Mazda 3 has been around since 2009, a mid-life facelift in 2012 ensures it still looks fresh. The changes include a narrower, softer grille at the front and a new rear bumper design that’s been shaped to make loading the boot as easy as possible. The interior has also been made more stylish, with a sleeker layout and better quality materials. There’s plenty of room, but the driving position is a bit awkward – it feels as if the seat is mounted very close to the ground and the steering wheel doesn’t extend far enough towards the driver. The quality of the plastics on the dashboard and door panels is still no match for the likes of the Volkswagen Golf, but build quality is first rate. The old specifications – S, TS, TS2 and Sport - have been replaced by new Tamura, Venture and Sport Nav models. All come very well equipped, though, with standard kit including dual-zone climate control, all round electric windows, front fog lights and heated door mirrors. Venture cars also get 17-inch alloy wheels, a new roof spoiler, side skirts, a sports grille, cruise control, rain-sensing wipers, automatic lights, heated front seats, privacy glass, Bluetooth and a TomTom sat-nav, while Sport Nav models add a built-in 5.8-inch touchscreen and a Bose stereo.

At 4,460mm wide, 1,75mm5 long and 1,470mm tall, the Mazda 3 is a decent-sized family hatch. Unfortunately, the swooping roofline means that space in the rare seats is compromised. Tall adults will struggle for headroom. However, the front seats are comfortable and supportive. The boot offers 340 litres of space, which is 24 litres more than the Focus but a massive 137 litres less than a Honda Civic. The big, square opening is a bonus, though, as is the standard-fit 60:40 split folding seats. It’s just a shame that the boot floor is so low, as it makes loading more difficult.

Mazda has always performed well in reliability surveys and it finished 17th in the 2012 Driver Power manufacturer results, one place ahead of Volkswagen. The 3 itself finished 58th in the Top 100, with lots of praise for its reliability and sharp handling. One of its biggest problems, though, was the bigger-than-expected monthly motoring bills for owners. And there's no doubt that it feels very well put together; panel gaps are ruler straight, while the controls and cabin feel built to last. It received a five-star Euro NCAP rating when it was tested in 2009. Electronic stability control, active head restraints, seatbelt reminders and Isofix child seat fixings are fitted as standard, along with driver, passenger and curtain airbags.