The mid-range Ford Focus Zetec achieves a tempting mix of sporty and sensible. 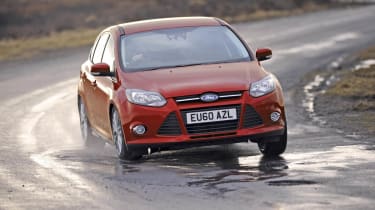 The Ford Focus is a UK bestseller, and the mid-spec Zetec model is the most popular version of Ford's market-leading family hatchback. Like every model in the range, there are a variety of engines available on the Zetec, and the Focus sets high standards for quality, comfort and handling in the hatchback class. The five-door hatchback is the mainstay of the range but if you want more space, then there’s an estate version on offer, too.

The Zetec model is the sweet spot in the Ford Focus line-up, as it comes with decent kit but is more comfortable than higher-spec models thanks to smaller wheels. And if you want a bit more kit, there’s always the sat-nav equipped Zetec Navigator to go for.

As the Zetec is the most popular option in the Focus range, the engine line-up is broad. We'd choose the three-cylinder turbocharged EcoBoost petrol engine, as it strikes a good balance between lively performance and low running costs.

If you want a stylish hatchback, then you might want to look elsewhere. The Focus’ mix of angles and curves up front look awkward when compared to the SEAT Leon, although the facelift, which adds a Fiesta-style grille, gives the design a bit of a lift.

The rest of the car follows a standard hatchback template, although the roofline is slightly longer than its rivals’, giving the Ford a slightly squarer profile. Zetec cars get 16-inch alloy wheels and front foglights as standard and add a flash of chrome trim to the window line, while 17-inch alloys are available as an option. 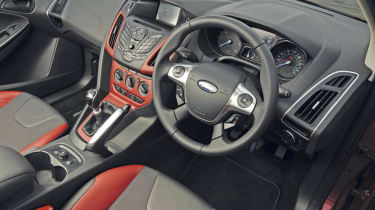 Inside, the Focus features a sculpted centre console with a small 3.5-inch display and a large bank of buttons below that’s flanked by vertical air vents. In Zetec cars, the centre console is finished in rather drab grey plastic and standard rotary controls for the air conditioning, although Zetec Navigator cars are given a lift thanks to the standard TFT instruments.

Overall, the Focus is well built, and the quality of the switchgear is great – we just wish there weren’t so many buttons and that the sat-nav screen was larger.

The Ford Focus has been designed with comfort and efficiency in mind, but it's also enjoyable to drive, thanks to its sharp steering, agile chassis and strong grip. As a result, the torquey 1.0-litre EcoBoost engine suits its sporty nature.

The three-cylinder thrum from this model won’t be to all tastes, but the six-speed manual version features a dual-mass flywheel that eliminates vibrations, and the engine is settled at motorway speeds, while the suspension does a good job of soaking up bumps.

In corners, the Focus is very entertaining, with quick steering and a responsive chassis. It’s not quite as focused as past models, but still has an edge over its rivals for handling. 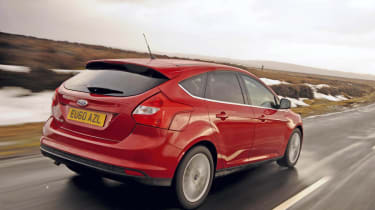 When you consider how many Focuses have been sold, it appears to be a fairly reliable car. There are no major issues that potential buyers need to be aware of, although the 1.0-litre EcoBoost is still quite new, so it’s too early to see how such a small engine handles high mileages.

We had no problems with it in the Focus Estate we ran on our fleet, though, and that clocked up 20,000 miles in a year. Ford’s safety technology helped the Focus earn a five-star Euro NCAP crash test rating. You get six airbags and ESP as standard, while the Zetec model includes handy extras such as heated mirrors and a Quickclear heated windscreen. On top of that, you can add Ford’s £550 Driver Assistance Pack, which brings pre-collision city braking, a lane keeping aid, traffic sign recognition, auto lights and wipers and a driver alertness monitor.

Boot space is a little lacking in the Focus, because while it’s relatively large on the outside, it’s not the most spacious car inside. There’s a 316-litre boot – which is 89 litres down on the Renault Megane – and this only rises to 1,101 litres with the seats flat. That’s 109 litres behind the SEAT Leon, although a shallow floor makes it easy to unload big items.

Rear seat space is reasonable, although the small back windows and sloping roof make the Ford feel tight. There’s a decent glovebox, door bins and cup-holders, and the central armrest cubby is part of the upgrade from Zetec to Zetec Navigator.

If you really need more practicality, you can always opt for the Ford Focus Estate. This has a 476-litre boot that expands to 1,502 litres. There's lots of extra headroom for rear passengers, too. 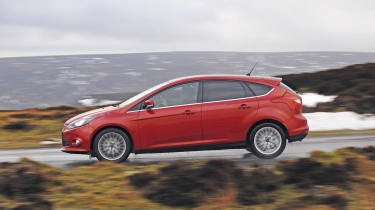 The latest Ford Focus is lighter than ever before and as a result it's cheaper to run. Highlights in the range include a frugal 1.0-litre EcoBoost engine, which manages 58.9mpg and emits only 109g/km of CO2, but the reality is that you would have to drive extremely cautiously to achieve this. Standard stop-start helps, and we’ve managed 43.4mpg on test.

We'd also recommend the 1.6 TDCi for high-mileage drivers, as it offers tax-free CO2 emissions of 88g/km and still manages 83.1mpg. The great thing about the Ford Focus is that you get lots of equipment and accessories as standard - all for a great-value price tag. Fortunately, the Zetec Navigator model adds satellite navigation, DAB radio, Bluetooth and a USB connection.

Due to the popularity of the Ford Focus, you're likely to find plenty for sale on the used car market, while parts and servicing should be relatively inexpensive. However, residuals aren't great, and you'll be lucky to get even 40 per cent of its value back after three year's time.

Check out our round-up of the best family hatchbacks on sale now here.