This is one Galaxy that's not so far, far away! Ford's new range-topping MPV the Galaxy Ghia arrives in June 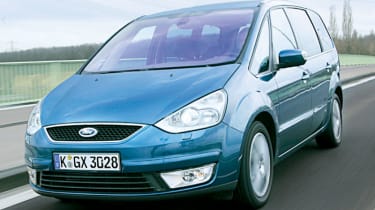 Large MPVs aren't the most fashionable cars at the moment, but we can't help being enthusiastic about the new Galaxy. It's extremely versatile, far better to drive on open roads than an SUV, and more fuel efficient. However, it is hard to manoeuvre in town. Interior quality has taken a quantum leap forward, though, and owners will feel truly proud of this Ford.

Set to take on the Renault Espace and Chrysler Voyager, the Galaxy is bigger than before, with a clever seven-seat cabin and sporty new look.

Sharing much of its engineering with the forthcoming Mondeo, it promises to be a great driver's car with a wide range of powerful engines. But is that enough to keep it ahead of the opposition? Auto Express found out in an exclusive first drive.

The newcomer's vast size makes an immediate impression. It's nearly five metres long - about the same as Mercedes' latest S-Class. It looks good, though, and draws inspiration from the sportier S-MAX MPV. Inside, the Galaxy is even more impressive. While moving the seats around in its predecessor felt like a session at the gym, doing so in the new model is a breeze.

All the rear chairs fold easily with a simple pull of a lever - as in Land Rover's Discovery - leaving a massive, flat loadspace of 2,325 litres. What's more, each chair, including the two in the rearmost row, adjusts for length, while their backrests also recline. Not even Mercedes' new R-Class can match this, and tall adults will certainly be happy travelling in the back of the Ford.

With a raised 'theatre-seating' position, occupants in the third row get a great view, while large glass areas let lots of light enter the cabin - particularly if you opt for a panoramic sunroof. A central storage console, similar to the Vauxhall Zafira's, is offered as standard on all models. However, there are drawbacks: luggage space is only 308 litres in full seven-seater mode, and you can't fold the rearmost chairs flat from the boot without opening a side door and lowering the middle row first.

As with the old model, access to all but the front seats would be easier with sliding side doors, and the tailgate is vast. However, the cabin is full of neat storage solutions, including two big compartments under the middle row of seats, and one in the boot.

Up front, the new dash is attractive, and the quality of materials is excellent. The standard of kit is impressive, too. All trims - LX, Zetec and Ghia - have air-con, while the range-topping Ghia features climate control, a six-CD autochanger and parking sensors.

On the road, the Galaxy continues to impress. The steering is precise and, despite its size, the big MPV handles well with limited body roll and plenty of agility. However, its girth and large turning circle are noticeable when driving at parking speeds.

Four engines will be available from launch - a 143bhp 2.0-litre petrol, 99bhp and 121bhp 1.8-litre TDCi diesels and a flagship 138bhp 2.0-litre TDCi oil-burner. We sampled the most powerful derv unit which, when mated to a six-speed manual gearbox, provides sprightly performance, covering 0-62mph in 11.2 seconds. It's a re-fined engine, too, and returns more than 34mpg. That noted, the petrol and lesser diesel models will probably struggle with the MPV's size.

The Galaxy is a huge improvement over its predecessor. It's very big, but makes excellent use of its space, looks great and drives well. It's also competitively priced to challenge its rivals.