Do revisions keep blue oval’s popular MPV at top of the class? 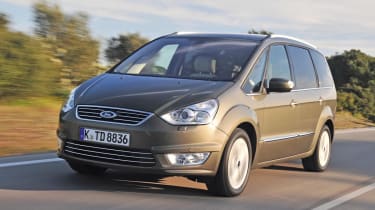 Big on practicality and fun, the Galaxy combines a hugely flexible seven-seat cabin with an engaging driving experience. It’s no wonder the car accounted for more than half of all large MPVs sold last year. The 2010 update adds a more premium feel, with a pair of powerful and refined new engines, and some light upgrades inside and out. With the sportier S-MAX also a hit in the sales charts, it seems Ford has the MPV market cornered.

While the Ford S-MAX majors on a sporty driving experience, the Galaxy has always been focused on comfort and space – a recipe that has proved a huge hit in the UK.

It outsells its closest rival, the VW Sharan, five to one, and it claimed a 59 per cent share of the large MPV segment in 2009.

To tighten its stranglehold on the competition even further, Ford has implemented a raft of styling and mechanical changes for 2010. Revisions include the introduction of a new 2.0-litre turbo EcoBoost engine and an updated 161bhp 2.0-litre TDCi. As 97 per cent of all Galaxys sold are diesels, we hit the road in the latest oil-burner.

The unit is mated to a six-speed manual transmission, and gives economy of 49.6mpg and CO2 emissions of 152g/km – impressive considering the performance on offer. The TDCi punches hard through the rev range, thanks to a generous 340Nm of torque, while softer springs than in the S-MAX make for a comfortable ride. And despite the car’s tall stance, body roll is well controlled.

Also available is a less exuberant 113bhp version of the same engine, with a 138bhp motor to follow a few months after the April on-sale date.

Visual changes to the Galaxy include a more sculpted bonnet, a bolder front grille, new-look foglamps and LED tail-lights.

Inside, there’s bags of room, and space for seven in comfort. Ford’s Fold Flat seat system is also included as standard.

There’s a premium stereo, with a subwoofer behind the passenger seat. Plus, high-quality Windsor leather trim and a new light beige Biscuit colour for the upholstery give the interior a high-quality feel, especially in top-spec Titanium trim.

As we reported in Issue 1,101, the long-running, but more conservative, Ghia trim won’t be an option on the 2010 Galaxy. Instead, buyers will be offered the choice of Zetec, Titanium and Titanium X specs – another example of how Ford is looking forward to a bold and modern future.

Rival: Grand Voyager Chrysler's practical seven-seater is a sensible choice. It has a smooth diesel, but is let down by an uninspiring interior.