Hardcore Ford GT unveiled at this year’s Goodwood Festival of Speed, with 690bhp and a price tag of around £1 million 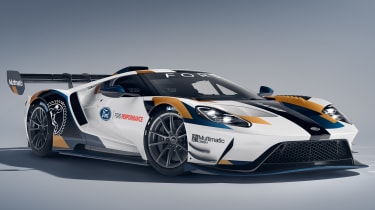 Ford has launched a track-only version of its supercar, called the Ford GT Mk II. Revisions over the standard GT include improved aerodynamics, a new chassis setup and more power. Production is limited to just 45 examples, each costing $1.2 million (around £950,000).

Aerodynamic upgrades include a large dual-element rear spoiler, a functional rear diffuser, a new front splitter and a set of dive planes and louvres for the front wings. Ford claims these changes provide the GT Mk II with 400 per cent more downforce than its road-going sibling and, in conjunction with its chassis upgrades, up to 2G of lateral grip.

The GT Mk II is powered by the same turbocharged 3.5-litre V6 EcoBoost engine as the road car but has been tuned to develop 690bhp - the most powerful version of the Ford GT ever made. The extra performance is supported by a large air-to-air intercooler and better ducting.

Inside, the Ford GT Mk II gets a unique Sparco racing seat, a six-point racing harness and a Motec digital gauge cluster, which doubles as a display for the car’s rear view camera. Buyers can also spec a passenger seat as an optional extra.

What are your thoughts on the track only Ford GT Mk II? Let us know in the comments section below... 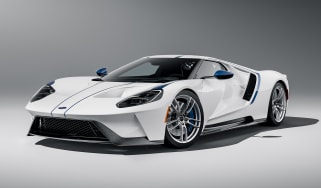