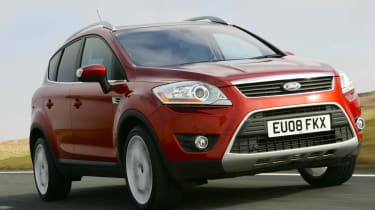 We’re big fans of the Kuga – it’s great fun to drive, brilliantly built and highly practical. And in diesel trim it certainly comes highly recommended. However, the sums simply don’t add up for the 2.5-litre turbo model. It offers excellent refinement and performance, but it’s thirsty and too expensive.

There’s much to like about Ford’s Kuga – it’s one of the best SUVs in its class, with a fine blend of good looks, off-road ability and driver appeal.

So far the Focus-based 4x4 has only been offered with a 2.0-litre diesel, but now the range is benefiting from petrol power – and not just any unit. Under the bonnet is the same 2.5-litre five-cylinder turbo engine as in the Focus ST and RS. Revised tuning means it now produces 197bhp at 6,000rpm and a meaty 320Nm of torque from only 1,600rpm. A slick six-speed gearbox helps provide rapid acceleration, with 0-60mph taking around eight seconds.

Thanks to the unit’s deep-chested urge, overtaking moves on B-roads and motorways are dispatched swiftly and easily, often without any need to change down. As with the diesel, the Kuga is great fun on a twisty route, turning into corners keenly, steering precisely and gripping hard irrespective of the quality of the tarmac. Body control is taut, the ride is comfortable and refinement is extremely good.

In fact, it’s almost too refined. The engine is so muffled that even under full throttle you can barely hear the offbeat five-cylinder warble that gives the Focus ST so much character. One element that is shared by the two models is their fuel economy.

Ford claims that the Kuga 2.5T returns 28.5mpg on the combined cycle. But if our experience of the Focus ST is anything to go by, added to the fact that the Kuga weighs around 170kg more at 1,608kg, owners will struggle to get any better than 25mpg in regular driving.

Then there’s the yearly tax bill of £400, thanks to CO2 emissions of 234g/km. By comparison the diesel model is far more economical, returning 44.1mpg combined, and with just as much torque, it’s nearly as rapid on the move. Our Titanium test car is well equipped, but at £24,295, it’s very expensive. So while the Kuga 2.5 is great to drive, it doesn’t make much sense.