family favourite is latest to get aero and mechanical tweaks for BETTER economy and emissions. 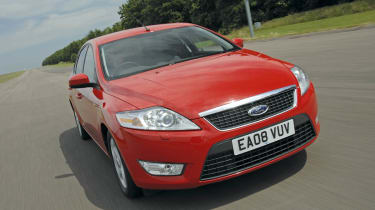 THE ECOnetic version of Ford’s family favourite brings useful cuts in consumption and CO2 emissions over the regular 1.8-litre TDCi. So, if you’re looking for a penny-pinching Mondeo – whether you’re a private buyer or company user – it’s the pick of the range. The high gearing can hamper performance, and it’s costly compared to rivals. But factor in the brilliant handling, build and space, and this model comes highly recommended.

When you’re launching a new car, timing is everything – and some makers get it spot-on.

With fuel prices firmly in the headlines, Ford’s latest model couldn’t have arrived at a better point. Joining the Focus variant – which we tested back in April (Issue 1,010) – the Mondeo ECOnetic is another more economical and cleaner version of an existing car.

On sale now, it’s based on the 1.8 TDCi Zetec. And it’s launching into a growing market – Volkswagen is pushing its Passat Bluemotion, while Vauxhall will soon have an Insignia ecoFLEX. As with the Focus ECOnetic, the Mondeo gets some aero aids to make it more slippery through the air – these consist of a boot spoiler and a flat tray under the car. It benefits from sports suspension as well, which means it sits lower to the road, reducing drag.

Under the bonnet, the 123bhp 1.8-litre TDCi engine gets a diesel particulate filter, while the five-speed manual transmission has been given a longer final ratio. There are also new low-rolling-resistance tyres and low-viscosity oil.

Inside, it’s business as usual. The only real update is the introduction of a ‘change up’ arrow on the rev counter, which highlights the most efficient point for the driver to shift gear.

So what is the result of these tweaks? Well, combined fuel economy increases from 50.4mpg to 53.3mpg, while CO2 emissions drop from 149g/km to 139g/km.

This won’t make any difference to road tax, but will save business users money, as the Ford falls from the 20 per cent company car tax band to 18 per cent.

On the move, the ECOnetic is as good to drive as any other Mondeo. It’s comfortable as well. The 215/55 R16 tyres have a chunky profile, and absorb bumps efficiently. You certainly notice the longer gearing, though. Initial response is dull, and around town the car can labour when negotiating junctions in second. This isn’t so much of an issue on the open road, where there’s plenty of shove from the torquey diesel.

The modified top ratio means high-speed cruising is even more relaxed than in the standard car, making the ECOnetic an ideal companion for motorway driving.

The equipment tally includes air-con and Bluetooth mobile phone connectivity. That’s very similar to the Zetec, although the latest car costs £250 more, at £18,745. And in our book, this makes it the greenest and best value Mondeo available.

However, it’s worth pointing out that VW’s Passat Bluemotion posts slightly better economy and emissions figures, and weighs in at only £17,295.