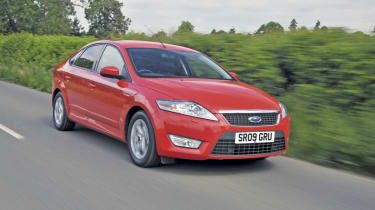 The latest addition to the blue oval’s ECOnetic family is an extremely competent all-rounder. The traditional Mondeo traits of practicality, versatility and driveability are all still very much in evidence. However, the new engine means that the car is the cleanest and most efficient vehicle in the entire range, too. Combine this with impressive performance and handling, and it means the 2.0-litre oil-burner is a very attractive prospect to both families and businesses alike.

It’s the cleanest, greenest version of the Mondeo Ford has ever built! We were highly impressed with the saloons 1.8-litre ECOnetic engine when we first sampled it last year, but now the top-selling saloon has an updated, even better-performing 2.0-litre TDCi diesel powerplant. And we have taken it out on the road to see how it rates.

On sale now, the new, larger capacity motor actually offers 10bhp less than the 1.8 unit it replaces... but it retains the same amount of torque.

The diesel engine is also mated to a six-speed manual gearbox which boasts longer ratios.

These changes result in better fuel economy of 54.6mpg and an emissions rating that remains at 139g/km. All this means the new variant qualifies for the lowest tax band, making it a very appealing company car – significant given that these account for the greatest proportion of Mondeos sold.

This ECOnetic model has also been given low rolling resistance tyres, an optimum gearchange indicator, plus energy-saving sports suspension, air deflectors and a rear spoiler to improve aerodynamics.

Performance is impressive, too, and despite having less power than the 1.8, the torquey new 2.0-litre variant feels quicker than its 0-62mph time of 10.6 seconds suggests.

It’s on motorways where the Ford impresses most, though: it eats up the miles effortlessly, is smooth and comfortable, plus boasts minimal cabin noise. Despite the car’s large footprint, handling is good, too, with plenty of agility, great grip through corners, and responsive, nicely weighted steering.

In addition to its impressive green figures, the ECOnetic has the same credentials as the rest of the range. So there’s excellent cabin refinement and equipment levels as well as plenty of rear leg and headroom – plus an equally enormous boot. Also available in the Estate, the 2.0-litre ECOnetic starts from £20,145.

Lower emissions, better fuel economy and faster straight-line speed than the Mondeo all highlight what an impressive performer this eco Vauxhall is.