At last, we try facelifted family car on British roads. Is it still the class leader? 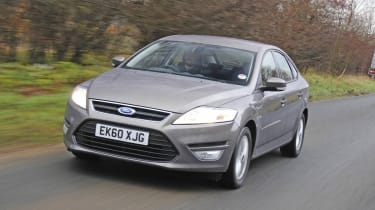 The Mondeo is as good as it’s ever been, and even this mid-range model does enough to challenge premium German opposition such as the Audi A4 and BMW 3-Series. It’s not perfect; the interior could be more special and it misses out on Ford’s latest gadgets. But this 138bhp diesel is the pick of the latest range, providing a fine blend of performance and low running costs. It’s a great driver’s car, and for business or family use, still a cut above.

Take a look at Ford’s slick new sales champion! We’ve already driven 238bhp EcoBoost petrol and 197bhp 2.2-litre TDCi diesel versions of the facelifted Mondeo (in Issues 1,131 and 1,132). But this 138bhp 2.0-litre TDCi Zetec is still the model most business and family buyers are likely to plump for. So how does it fare?
Few cars are as recognisable as the current generation Mondeo, although you might be forgiven for not spotting the updated model straight away. The design has been subtly tweaked rather than given a total overhaul, but all the minor changes do a good job of keeping the looks fresh. The key tweaks are at the front, where the bonnet has been reshaped, the lower grille is wider and the upper grille simplified to bring it in line with the C-MAX and upcoming Focus.

The foglamps have been reshaped, too, but only top-spec Titanium models get Audi-style LED daytime running lights. At the back are LED tail-lamps and a subtly updated bumper.
Inside, the changes are less obvious. While material quality has been improved, the design is starting to show its age when compared to the stunning interior of the new C-MAX. It’s as comfortable and roomy as ever, and there’s still lots of space in the boot, but the dull layout falls some way short of attractive rivals such as the Vauxhall Insignia and the revised Volkswagen Passat.
The Zetec version does without the clever gadgetry of the Driver Alert set-up, blind spot warning system and Auto High Beam headlights. It doesn’t feel like a poor relation, though. Bluetooth, cruise control and a multifunction steering wheel are all included as standard. The absence of these hi-tech innovations also allows the core dynamic talents of the Mondeo to shine through.
Mated to the six-speed manual gearbox, the 138bhp Duratorq diesel is a strong performer, and although it could be more refined at lower speeds, there’s easily enough torque to keep progress swift. In fact, it makes the new 197bhp 2.2-litre flagship appear unnecessary. What’s more, the 2.0-litre will cost £45 less in tax – a year’s disc works out at £110 – and return more than 50mpg.
It speaks volumes about the quality of the driving experience that four years after it was first launched, this Ford is still one of the best cars in its class from behind the wheel. Strong brakes, a quick, accurate gearshift and direct steering all let the driver feel connected to the road. And the grippy, balanced chassis is as engaging as ever. That should be enough to keep the Mondeo at the top of buyers’ wishlists.
Share this on TwitterShare this on FacebookEmail