We try the flagship 197bhp diesel Mondeo, but is this sportier version of the saloon worth its higher price tag? 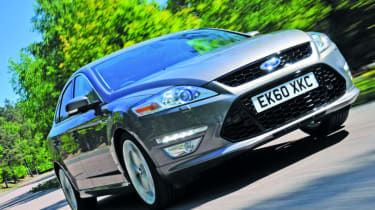 The Titanium Sport X is probably the most desirable Mondeo, with its sporty exterior, extensive kit list and punchy engine. However, it’s not the pick of the range. The price tag puts it dangerously close to the BMW 3-Series, so most buyers will be better off with the 2.0-litre 161bhp TDCi version. Not only is this more comfortable, it’s nearly as quick and costs less to buy and run.

Meet the ultimate Mondeo! We’ve already driven the flagship diesel version of Ford’s sales heavyweight as an estate in Issue 1,132 – but this is the first time we’ve tried the most powerful oil-burner on UK roads.

Our Titanium Sport X model came with plenty of aggressive touches to set it apart from lesser variants. These include a huge black honeycomb grille, 19-inch alloys and a boot spoiler. From the outside at least, this car clearly means business.

Step inside, and the racy theme continues, with drilled alloy pedals, swathes of carbon-effect trim on the doors and dash, and sports seats decked out in black leather and Alcantara.

The ageing interior might not quite have the glitz of Ford’s technology-laden new Focus, but plenty of customers will prefer the Mondeo’s simple, unfussy design and solid build. It’s also a comfortable place in which to spend time, with plenty of adjustment and firm yet supportive seats.

The uprated 2.2-litre Duratorq TDCi diesel engine has only four cylinders, but puts out a meaty 197bhp – and, more importantly, 450Nm of torque. That means overtaking is easy, while the Mondeo can sprint from 0-62mph in only 8.1 seconds, and hit a 143mph top speed.

Minor changes made to the injectors and cooling systems also mean that the flagship is cleaner than ever. It emits only 159g/km of CO2 and returns combined fuel economy of 47.1mpg. However, on the road, the saloon rarely feels as fast as the statistics suggest. The powerband is surprisingly narrow, which means you have to work the engine and six-speed gearbox quite hard to extract the full performance. The extra grunt creates other problems, with torque steer an issue in second and third gears, while the larger wheels make for a rather stiff ride.

Yet despite these faults, this version of the Mondeo still serves upthe taut handling for which Ford is famous. On winding roads, the perfectly weighted steering and slick controls make the car much more enjoyableto drive than rivals such as Volkswagen’s Passat.

It’s an equally accomplished motorway cruiser, and although the engine can sound gruff when getting up to speed, road and wind noise are well suppressed.

Unfortunately, there’s only one spec option available with this powerful engine. And while the Titanium Sport X comes extremely well equipped, its hefty £27,855 price tag is likely to persuade buyers to go for more premium rivals.