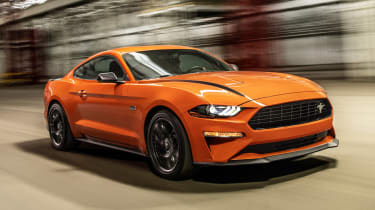 The four-cylinder Ford Mustang is now available with the firm’s new High Performance package. Released to coincide with the model’s 55th anniversary, the package adds a range of track-focused chassis upgrades, slightly tweaked exterior styling and more power. For 2020, all new Mustangs will also feature FordPass Connect as standard.

The package is only available with a tuned version of Ford’s turbocharged 2.3-litre four-cylinder EcoBoost engine. Upgrades over the standard engine include a bigger turbocharger, a larger radiator, a reworked exhaust system, an improved cylinder head and a recalibrated ECU. 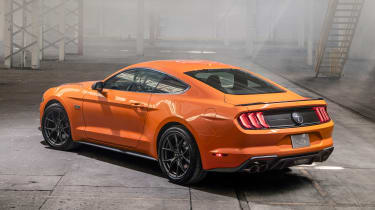 Ford claims these engine revisions make the Mustang High Performance Package the most powerful American-made four-cylinder sports car on sale. It produces 325bhp and 475Nm of torque, all of which is sent to the rear wheels via either a six-speed manual or a 10-speed automatic gearbox, with the former offering a 0–60mph time of around four seconds and a top speed of 155mph.

Like all 2020 Mustangs, the High Performance version comes with FordPass Connect, allowing drivers to interact with their vehicles via their smartphone. Using Ford’s integrated application, owners can locate their car, lock and unlock it and even check its oil level, fuel level and maintenance alerts.

The Mustang High Performance package won’t make it to Europe, but Ford expects that the four-cylinder UK model will receive the same hike in power by October this year (pending WLTP homologation), with performance increasing from 286bhp to the 325bhp. Prices are yet to be announced, but we’ll update you when they’re available.

Now read our review of the Ford Mustang Convertible. Let us know your thoughts in the comments section below…