2017 Shelby Mustang Super Snake blasts in with up to 740bhp

New Shelby Super Snake 50th Anniversary takes the Ford Mustang and turns everything up to 11. 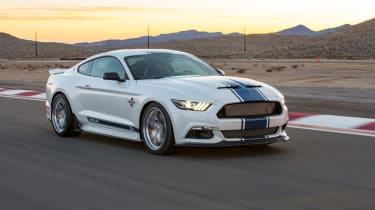 The Ford Mustang may have just been treated to a facelift, but Iconic tuner Shelby has revealed a proper send off for the current car, celebrating 50 years of the Shelby Super Snake.

• Our top ten muscle cars of all time

Looking at the numbers, the new Super Snake should prove to be a more than capable rival for the 707bhp Dodge Challenger Hellcat. Based on the Mustang GT it gets a 5.0-litre V8 engine, but supercharged to produce 661bhp in its most timid guise  - additional tuning can unlock up to 740bhp. 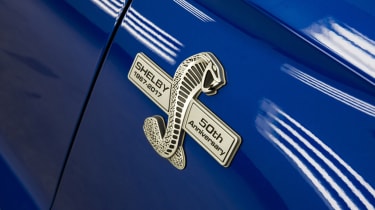 Shelby claims that a “properly optioned” Super Snake can do 0-60mph in 3.5 seconds and a quarter mile dash in 10.9 seconds. Alongside the extra power, the tuner has teamed up with Ford Performance to alter the Mustang’s suspension and introduce new, larger performance brakes to provide uprated stopping power.

Performance tweaks aside the Super Snake wears aggressive new bodywork befitting of its more powerful engine. A new bonnet, plus new wings, grilles, splitters and new rear diffuser and exhaust setup accentuate the Super Snake’s muscle car character. Customers can have their Super Snake painted in any Ford factory colour, and it can be ordered with either a manual or automatic transmission.

Each one of the 500 cars will get a unique plaque signed by the build team fixed under the bonnet, with all of them assembled at Shelby’s facility in Las Vegas.

Would you take the Super Snake over the Challenger Hellcat? Tell us your favourite in the comments!