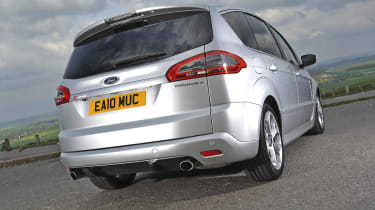 With its updated range of diesel and petrol engines, plus subtle exterior and interior enhancements, the new S-MAX manages to impress even more than its predecessor. Combine this with its excellent handling plus a practical, spacious layout, and it’s hard to find much to fault about the new Ford. A wide selection of different trims and fine levels of standard equipment are thrown in for good measure, too. It all adds up to the best MPV in its class.

Few family cars blend style, performance and practicality as effectively as the S-MAX. Yet the Ford people carrier is four years old now‚ and it’s about time for a refresh. The seven-seater has received some visual tweaks, a revised cabin and updated engine range – but how does it stand up?

The MPV’s appearance is little changed, aside from a sportier-looking, more sculpted bonnet, redesigned front bumper and more pronounced grille. LED daytime running lights are now an option on higher-spec models, while a new chrome strip surrounds the windows. At the back there are LED tail-lights and an embossed S-MAX boot logo.

Inside, the standard-fit, cleverly packaged, fold-flat seat system means there’s plenty of room to accommodate seven. Specify the optional one-piece panoramic roof and you’ll get lots of light, too.

But it’s the additions to the already impressive engine line-up that are the S-MAX’s biggest achievements. The 2.0-litre SCTi Titanium X we drove featured Ford’s direct-injection EcoBoost petrol turbo, and although it will not account for as many sales as the diesels, the new technology will play a big part in the firm’s future, with the upcoming Focus and C-MAX both due to get a smaller 1.6-litre EcoBoost unit.

What’s the new engine like to drive? Extremely good. The 200bhp unit manages to deliver decent power, increased efficiency and lower emissions compared to the larger 2.5-litre five-cylinder turbo it effectively replaces. Acceleration is responsive, turbo lag is virtually negligible and delivery is smooth all the way through the revs.

The 0-62mph benchmark takes only 8.5 seconds, and with a top speed of 137mph this is a family car that’s equally at home on a challenging B-road or cruising quietly on the motorway.

The EcoBoost’s impressive acceleration is matched by decent running costs: combined fuel economy of 35mpg is not bad given the pace available. Business users will smart at the CO2 emissions, though, and they’ll be better off in the 2.0-litre diesel version. No matter which 2.0 Duratorq TDCI unit you choose – 113, 138 or 161bhp – CO2 emissions are 152g/km and economy is 49.6mpg.

There’s also a 2.2-litre unit.The six-speed PowerShift dual-clutch box also gets the thumbs-up; the S-MAX is the first large Ford to use the new unit, which offers swift and smooth changes.

Show the S-MAX a twisty road and it’s clear the big MPV is still the best-handling car in its class. Despite its size, it sticks to the tarmac nearly as well as the Mondeo, with high grip levels in corners and steering that’s nicely weighted and very direct. The ride is smooth and compliant, too.

On sale now, there’s plenty to recommend about the new S-MAX. It starts at £20,645 for the entry-level version, and offers great value for such an excellent all-round package.

Our top-spec Titanium X is harder to justify, costing close to £28,000. It does boast plenty of kit and extras, though. As standard you get Alcantara seats, 18-inch alloys, a rear spoiler plus sports body kit and suspension. Whatever the model, the S-MAX remains a tempting proposition.

Rival: Peugeot 5008 A spacious cabin and frugal, punchy engines are the 5008’s strongest assets. Its soft set-up gives a smooth ride, but the trade-off is poorer handling than the Ford. Its sub-£17,000 start price is very competitive, though.