The S-Max is an MPV with a lot to offer. Cleverly conceived and brilliantly executed, the Ford has very few weaknesses in any area. Families need look no further. 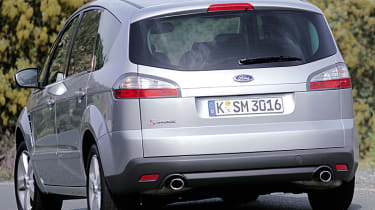 Driving: The seven-seat S-Max's main selling point is driver involvement; Ford feels you shouldn't have to sacrifice driving pleasure for practicality. Fortunately, it lives up to the hype - steering is impressive, while the turn-in is positive and sharp. Body roll is well controlled and the suspension strikes a fine balance between ride and handling, meaning that over a twisty road it feels rewarding. Add in perfectly weighted controls, and it emerges as a fine drivers car. With ample power in diesel and characterful 2.5-litre petrol guise too. These engines are responsive and refined, though the 2.0-litre petrol does need working a little harder.

Marketplace: Designers try hard to make MPVs appear cool and stylish, but it's a very difficult task. However, we think Ford has done a fantastic job with the S-Max. Effectively a vehicle carving out its own niche, it is described as a 'sporty interpretation of the people mover', and the styling reflects this. The profile is racy, while unique tail lights, side vents and foglamps help further distinguish it from the taller, more upright Galaxy it shares much componentry with. Three trims are offered with two petrol and two diesel engines. Most interesting is the 2.5-litre five-cylinder turbo nabbed from the Focus ST, but the 2.0-litre TDCi diesel will be the best seller. Sitting between the Galaxy and smaller C-Max in the Ford range, competitors are fairly wide ranging, and include the Vauxhall Zafira, Mitsubishi Grandis, Honda FR-V and Renault Scenic. Ford also sees it as a rival to premium estates such as the Audi A4 Avant and BMW 3-Series, while we also see similarities with the Mercedes R-Class!

Owning: Inside, it's similar to the Galaxy, as both share the same seating layout. Called the Fold Flat System, it creates a very useable load area without the need to lift out heavy chairs. Middle row seats slide back and forth too, and also fold for easy access to the rear. With plenty of headroom, they offer class-leading space - and even when pushed fully back, legroom for third row occupants is decent, though headroom back there is more restricted. The cabin also exudes an air of quality, with high-class dashboard materials and tight-fitting trim. The driving position is designed to be lower and more car-like than the Galaxy. A large glass area and unobtrusive A-pillars aid visibility. There's an excellent range of seat and wheel adjustment, while the dash and switchgear are logically laid out. Cabin stowage is good too - we counted 26 separate cubbyholes. Economy of diesel models is commendable (though the 2.5-litre petrol can be very thirsty) and running costs generally seem competitive; Ford has the largest dealer network in the UK, and some of the lowest servicing prices (though 12,500-mile intervals are less impressive). Retained values are superb, with some models retaining nearly 50 per cent after three years - which is fortunate, as prices of some variants seem high. It's a shame to see ESP isn't fitted as standard.