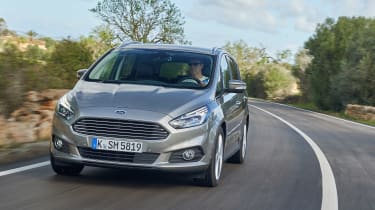 The new S-MAX has lost none of its magic, and remains one of the finest handling MPVs on sale. It’s great to drive, cheap to run and can seat seven in relative comfort. It’s better looking than all its rivals, and if you opt for one of the more powerful diesels, feels fast too. All things considered, this new S-MAX is better than ever, and is among a small collection of truly practical family cars you can buy with your heart as well as your head.

When the original Ford S-MAX launched in 2006, it changed the way we looked at MPVs. No longer did you have to compromise on space, style or driving dynamics – the fantastic Ford offered it all. Now, nearly a decade and 82,000 UK sales later, a new model is here.

The S-MAX has been a massive success for the brand, with over 65 per cent of customers coming back to buy another. What’s more, 70 per cent of S-MAX sales have been of well specced Titanium models or above – paving the way nicely for next year’s even higher-spec Vignale. 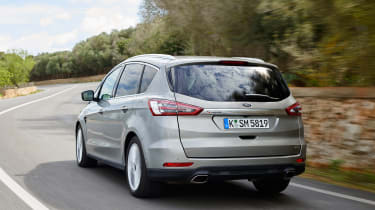 It’s inside where Ford has made the most changes. Gone is the cluttered layout and old-school Sony stereo, replaced by a clean eight-inch touchscreen. There are far fewer switches, and the bulky, airline-style handbrake has been replaced by a single button that also frees up space for a large storage bin between the front seats. The TFT screen within the dials is clear and easy to read, although it takes a while to navigate through all the menus.

These visual changes haven’t affected practicality, though. The S-MAX still boasts 2,020 litres of boot space with all the seats folded flat – 169 litres up on the Citroen Grand C4 Picasso. This reduces to 965 litres with only the third row folded and 285 litres with all seven seats in place – although that’s measured up to the roof, meaning the space is wide and high but not very deep.

The rearmost row isn’t as generous as in rivals due to the sloping roofline, although with the middle seats slid forward, you will be able to squeeze a pair of adults in the back for short trips. Getting back there is now easier, too, thanks to a new system that slides and tips the second row forward in one smooth action. 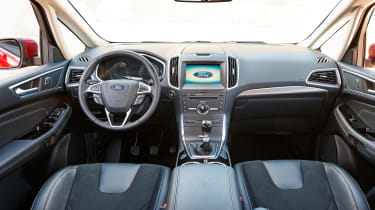 With almost identical interior dimensions to its predecessor, there’s loads of head and legroom in the second row, although shoulder room is a bit tight with three adults side by side. There is an Isofix point in each of the second-row seats, too, so you can fit three child seats if need be.

Handy optional features include a full-length panoramic roof for £750, one-touch buttons to electronically fold the second and third row of seats (part of the £400 family pack that also adds tray tables) and an automatic tailgate. Stick with standard equipment and a pull cord folds the third row flush into the boot floor with ease, while the second row flops forward via a conventional button release.

Engine choice comes in the form of 1.5-litre EcoBoost petrol and 2.0 TDCi diesels, and a 237bhp 2.0 petrol auto. Ford expects 85 per cent of customers to opt for one of the four diesels, so we drove the second most-powerful 178bhp TDCi (other outputs are 118bhp, 148bhp and 207bhp). It’s also available with four-wheel drive and an automatic gearbox, but we took the wheel of the front-drive manual on the twisting roads of sunny Majorca, Spain. 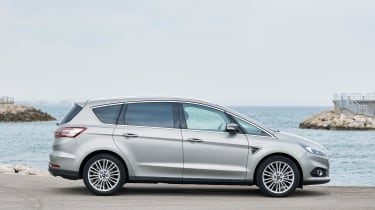 The good news is the S-MAX hasn’t lost any of its character. The well weighted steering and punchy engine remain key to its appeal, while the supple suspension makes it both fun to drive and comfortable on long trips. It belies its size and weight, plus it feels very poised when the mood dictates. There’s loads of grip and you always know where the front wheels are pointing – giving you a remarkable amount of confidence. There’s very little body roll, too.

It’s easy to see why the mid-range 148bhp car is predicted to be the biggest seller in the S-MAX line-up, but our more powerful TDCi adds an extra 50Nm of torque, taking total output to 400Nm. It has plenty of in-gear shove, costs only £750 more and returns identical economy figures.

Four-wheel drive is available on two of the four diesels, but the standard car has so much grip it’s probably not worth opting for. The auto box is good – if a little slow compared to VW’s DSG – but the manual transmission is smoother and more precise.Our S-MAX’s economy of 56.5mpg and 129g/km CO2 emissions amount to annual road tax of £110. 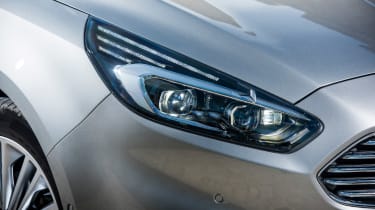 That might not sound too bad, but when you consider Citroen’s most economical Grand C4 Picasso emits less than 100g/km, it seems some way off the pace. Still, unless you opt for the bonkers 237bhp version, no S-MAX should break the bank in terms of running costs. However, a top-spec Grand C4 Picasso with a 148bhp 2.0 BlueHDi still costs £1,335 less.

At the front, it gets the Mondeo’s Aston Martin-style grille, as well as new headlights and repositioned foglamps. At the rear, there’s a new set of LED tail-lights and a revised bumper design. Plus all models come loaded with kit. As mentioned, the Titanium is expected to be the big seller here in the UK, adding all the equipment your average family might need.

The new S-MAX feels decidedly plusher inside, with SYNC 2 infotainment standard across the range. Titanium models get sat-nav, Bluetooth, privacy glass, auto lights and wipers and cruise control, on top of the basic Zetec’s parking sensors, keyless go and DAB. The quality of plastics seems to deteriorate the further back you go, but all cars get a pair of third row cup-holders and deep door bins in the second row.

As you’d expect, safety is important, too. Along with new second-row side impact airbags, tyre-pressure monitoring is now standard on all cars. Other new tech includes variable-lock steering – which reduces the amount of lock needed when turning at low speeds – and a system that reads road signs and adjusts speed accordingly.