Can the new MS-RT Ford Transit Connect follow in the successful footsteps of the bigger, MS-RT tuned Transit Custom? 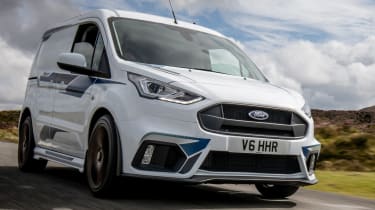 Despite looking the part, the MS-RT Transit Connect is more about style than substance and left us feeling like it's trying to be something it's not. However it still remains a great van to drive with a spacious load bay and practical interior. If you can live with the faux sportiness then there is very little like this on the market.

Based in Pontypool, south Wales, MS-RT has given the Transit Connect a new, aggressively sporty appearance by adding a plastic injection-moulded body kit. Hand-built on-site, this body kit is comprised of a new front bumper, grille, a front diffuser, side skirts, a rear bumper, a rear diffuser and a rear spoiler. 18-inch OZ Racing alloy wheels replace the standard 16” items and a stainless steel quad exhaust system completes the look. The MS-RT modifications may not be to everyone’s taste but if you’re after a Transit Connect with a bolder appearance this van certainly delivers. MS-RT’s effort should turn heads in the street and become a conversation piece in the builders’ yard and down the pub.

What makes MS-RT stand out from other customising companies who will work on your Ford van is that it is the first to gain the Ford Qualified Vehicle Modifier certificate (QVM). As with the larger MS-RT Transit Custom, the Transit Connect can be taken into any Ford dealership in the country (and Europe) and they will be able to do servicing and repair work no the vehicle, the same as they would with the standard van. 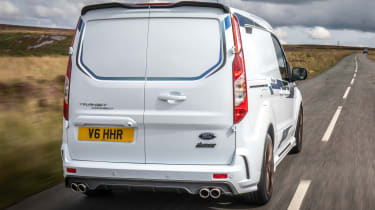 In order to keep the full manufacturer’s warranty intact, MS-RT has left the engine untouched. That means the Transit Connect’s 1.5-litre four-cylinder turbo diesel produces 118bhp and 270Nm of torque. It’s not as sporty as the racy exterior suggests. The engine is very smooth and refined on the move, however, and paired with the slick five-speed manual gearbox,(an optional eight-speed automatic is also available) drives in an impressively car-like manner. The only slight downside with the engine is that there is noticeable turbo lag when you put your foot down for an overtake.

MS-RT has left the Transit Connect’s suspension unchanged but the ride is firmer than in the standard van - something we can put down to the 18-inch OZ Racing alloy wheels and their lower profile tyres. Around the Welsh back roads on our test drive, the ride became unsettled and slightly crashy, especially when driving over manhole covers and potholes. We would expect the ride to smoothen out with the addition of weight in the rear but we only drove the Connect unladen.

The interior will be familiar to anyone who has sat inside a new Ford Transit Connect, the only differences added by MS-RT being the new leather carbon inlay steering wheel and the seats finished in nappa leather and suede. The steering wheel features moulded hand grips which are great on the move and give a racy feel when driving but they prove a little troublesome when trying to negotiate tight turns or roundabouts. The grips do not easily slide through your palms and this could become an annoyance.

There’s a full-height solid bulkhead behind the driver but you do still get the odd squeak or rattle coming from inside the loadbay. At least MS-RT’s modifications have left the Transit Connect with the same 2.9 cubic metres of load volume and a payload of around 630kg as it comes with as standard. If you need something with more space, the bigger MS-RT Transit Custom might be a better bet.

The closest thing that the MS-RT has to a rival is the Ford Transit Connect Sport from top of the standard Transit Connect range. With a more modest set of sporty upgrades, including a single stripe going across the body and a marginally different front and rear bumper, the Connect Sport does not have the same head-turning appeal as the MS-RT. What it does have is the same 1.5-litre four-cylinder turbo-diesel engine as the MS-RT so power and performance are identical.

All this gives the Transit Sport an ace up its sleeve compared to the MS-RT and that is its price. While the MS-RT comes in at  £23,995 (plus VAT) for the manual (£24,995 for the auto), the Transit Sport is only £21,216 (plus VAT). Seeing as both come with the same three-year, 100,000-mile warranty, it comes down to a question of whether you believe the extras on the MS-RT are worth the additional cash. 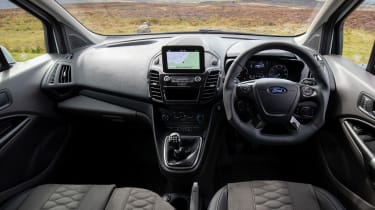 On that basis, there is clearly a market for the MS-RT but if bold looks aren’t your top priority, it might be better to stick to the Sport. The success of the MS-RT Transit Custom was rooted in the changes the company made to enhance the driving experience, upgrades that the smaller Connect model misses out on.