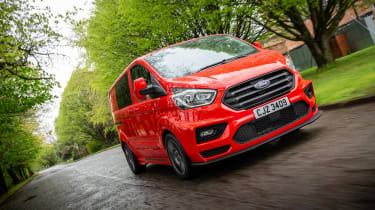 The MS-RT Transit Custom certainly stands out from the crowd, and the hand-crafted interior brings sporty luxury to a van unlike anything else we've ever seen. It's a credit to the team at MS-RT that they have turned the Transit Custom from an everyday workhorse to a genuinely desirable vehicle that has a sporty edge that few SUVs, let alone MPVs, will be able to match. The chassis tweaks are well judged, too, boosting comfort a little over the standard model.

We're big fans of the Ford Transit Custom here at Auto Express, and while most companies that modify the UK's best-selling van do so for practical purposes, there's one firm which is aiming to make the Transit Custom a more attractive machine to buyers wanting a van that stands out from the crowd.

We've already experienced and been impressed by the work of MS-RT with its limited edition Transit Custom R Spec, but now with a facelifted Transit Custom in showrooms, MS-RT has created a new bodykit to complement the updated van. Even better is the fact that this special Transit Custom is now offered via selected official Transit Centres across the UK.

But there's a lot more to the MS-RT Transit Custom than just flashier looks. You do get that, with a front end design that takes its cues from the Ford Fiesta World Rally Car run by MS-RT's co-founder Malcolm Wilson and his M-Sport team, but the standard of finish for the in-house designed and manufactured bumpers, side skirts, rear wing and diffuser-style bumper is so good you'd think they were OEM parts.

MS-RT has taken the opportunity of the updated Transit Custom to redesign the bodykit it offers, while the company's team of upholsterers have created a bespoke leather interior for the van, too. There's also a stainless steel exhaust system in development, while the same OZ wheels and Eibach suspension parts are used, which is another tie-in with the Fiesta WRCs run by M-Sport. 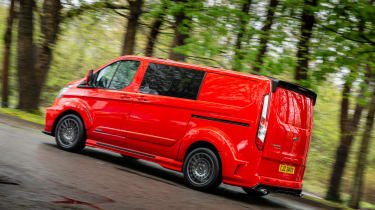 The result is a van that looks sporty, while the interior delivers a level of comfort that would've been unheard of in a Transit not even five years ago. There are a variety of seat finishes on offer, but the part-leather and Alcantara trim of our test van was faultless, which is full credit to the in-house MS-RT team and its hand-finishing process. Also included is a new flat-bottomed steering wheel that's hand-stitched and feels meaty to hold.

As the MS-RT model is based on Limited spec, it gets a decent amount of kit, and the upgrades that Ford has added as part of the Custom's facelift give this version an even more upmarket feeling. Adding the Sync3 sat-nav infotainment system only adds to the premium feel, while choosing the Double Cab In-Van version in MS-RT spec makes the Transit Custom an intriguing alternative to a family SUV or MPV.

On the road, the MS-RT upgrades help the Transit Custom feel better tied down when driving with the load area empty. There's less bounce from the rear end over bumps, while the combination of 18-inch wheels and standard Hankook Ventus S1 tyres means there's plenty of grip to spare, and it manages to emphasise the standard Transit Custom's existing sharp handling. The only downside on the van we tested was a slightly fidgety low-speed ride.

Prices for the MS-RT Transit Custom start from £32,995 for the Panel Van, which comes in short or long wheelbases and with either a tailgate or barn doors at the rear. Power for this model comes from Ford's 170PS Ecoblue diesel, while six-speed manual or Powershift auto boxes are available. The Double Cab In-Van version starts from £34,495 and comes with the same range of body and gearbox options.