Take a Ford Transit Custom, add some bespoke rally-inspired kit, and you get the unique MS-RT R-Spec, a performance van with a difference 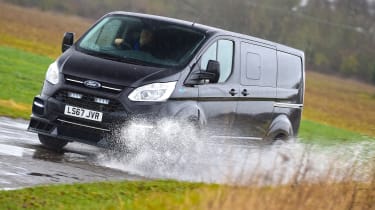 In a world of relentless SUV conformity, the MS-RT Transit Custom is a breath of fresh air. It's got space and practicality on its side, those Batman-on-deliveries looks are a real talking point and it could create an impression for business users. The R-Spec is a dazzling showcase for what MS-RT can do to Ford's commercial vehicles, and the additions feel like they're OEM parts in terms of quality, so it's no surprise that Ford is happy to endorse them. Add in the R-Spec's competent drive, and this is a sporty van that goes the extra mile. With an all-new bodykit in development for the new Transit Custom, MS-RT can't help but go from strength to strength.

Think of a performance Transit, and if you’re of a certain age, then the mighty Ford Supervan trio might spring to mind. In more recent years, we've seen an ageing Transit with running gear from the Jaguar XJ220 supercar wowing crowds at the Goodwood Festival of Speed. But if you wanted to buy a fast Transit for the road, then your only choice has been to go for the racy looking Transit Custom Sport with the most powerful 168bhp diesel engine. But that's set to change, courtesy of British company MS-RT.

MS-RT is a joint venture between Welsh firm Van Sport and Malcom Wilson, the man behind the M Sport rally team, currently going great guns in the World Rally Championship. And this is where the inspiration for MS-RT's vehicles lies, because the firm offers rally car-style looks for Ford's commercial vehicle range, chiefly covering the Transit Custom, Transit Connect and Ranger pick-up.

And as a showcase for what MS-RT can do, as well as to celebrate two years of the M Sport venture, it has launched the limited edition Transit Custom R-Spec. It's limited to just 50 models, and every one features the firm's full range of add-ons, as well as some performance tweaks under the skin.

It's clear that the R-Spec isn't your average modified Ford. MS-RT makes all of the polyurethane plastic body parts itself, and everything has been designed to fit exactly on a Transit Custom without modification. Indeed, the company now has British Standards certification for its components, so you can be sure of their quality.

The R-Spec features the firm's aggressive front bumper which is home to larger air vents and a low front splitter. These are all made of high-grade materials, and when in place look like factory-fitted items. There are wheelarch extensions and side skirts, while at the back is a tailgate spoiler and an enlarged back bumper with a diffuser and exhaust exits.

All these parts make up the standard Transit Custom upgrade, while MS-RT has added extra kit to the R-Spec in the form of super-bright Lazer spotlights and £500 optional 20-inch OZ alloy wheels wrapped in Michelin Pilot Sport tyres. Also included are larger 356mm vented disc brakes with blue anodized six-piston brake calipers up front with braided hoses. Finally the suspension has been tweaked with Reiger components that are designed to make the Transit Custom feel more at home on twisty roads than the usual trip to the builder's merchant.

Inside, the Transit Custom's standard interior is enhanced with a pair of Sparco rally seats that have been custom-trimmed by MS-RT. This Double Cab In-Van version also features a hand-finished rear bench seat covered in sporty suede cloth, while blue seatbelts add a finishing touch. Also included are blue-on-white dials and a chunky leather steering wheel. And to make sure security is up to scratch, MS-RT adds an enhanced lock on the driver's door.

This R-Spec also features a Maxhaust sound synthesiser. This adds a speaker in the spare wheel well that can be programmed to make fake engine noises, and this is controlled via a Bluetooth phone app. It's a gimmick, sure, but the child inside us likes the fact you can make this diesel Transit sound like it's got a growling Maserati V8 under the bonnet.

That doesn't mean the R-Spec is all show and no go, though. MS-RT has added some go-faster bits under the bonnet to help the 2.0 TDCi breathe a bit easier and add a bit more power. As a result you get around 205bhp, rather than the standard van's 168bhp. It all adds up to a van that's hugely entertaining, whether you're at the wheel or watching it fly by. 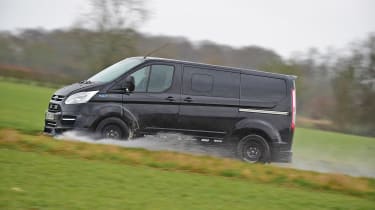 You'd think those 20-inch wheels would ruin the ride, but the Reiger enhancements mean this R-Spec is more composed than the standard van when unladen. There's hardly any bounce from the rear suspension, and while big bumps do upset the van, it's equally unsettled front and rear, so it feels more consistent than the standard model. Those grippy Michelins and the lowered suspension mean the R-Spec corners well, and though the unavoidably high centre of gravity means it will lean quite a bit, it's a good job those Sparco buckets are fitted, because otherwise you’d be out of the seats before the Transit gives up grip.

And thanks to the extra power on tap, the R-Spec is surprisingly rapid. This auto-equipped version is a little slow to shift, but you won't find yourself in the wrong gear that often, and it makes the most of the power on offer, allowing you to focus on the road ahead. Those enhancements under the bonnet also give the TDCi a quicker response and a more honed engine note, so you don't really need the fake sounds to get a sporty feel. 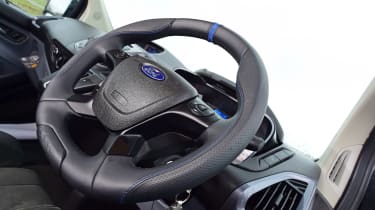 One highlight of this modified Transit Custom is that it's a real head-turner. Our car's none-more-black finish certainly helps, but wherever you go, the R-Spec causes a stir. You'll get thumbs up from other van drivers, kids will stop and stare, and it could be a stand-out choice for van users wanting to create an impression with clients and customers.

None of these tweaks spoil the standard Transit Custom Double Cab's versatility, either, so it doubles as a practical family MPV that the kids will love to be seen in.

If the R-Spec sounds like the van for you, then you're out of luck. All 50 have been sold at £36,000 (plus VAT). However, the R-Spec was also a run-out variant of MS-RT's first Transit Custom, because work is already well under way on its new model based on the facelifted Transit Custom. Even better is that Ford itself has started offering MS-RT's upgrades via selected dealers within its van network.

Enjoyed reading about the MS-RT Ford Transit Custom R-Spec? Then take a look at our page on the best small vans on sale.