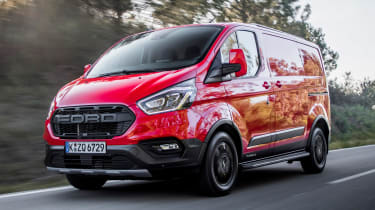 The Transit Custom Trail combines the practicality of the standard van with the rugged appeal of a pick-up truck. Black detailing and the big Ford grille give it big road presence, while the mechanical diff and optional all-season tyres offer traction in slippery conditions where the standard van would definitely struggle. If you're a business owner wanting a work vehicle that stands out from the crowd, you can't go wrong.

When it comes to vans, Ford is a market leader. But it's not resting on its laurels, and it has now launched the Transit Custom Trail. This is an an off-road biased van aimed at buyers that need a vehicle to handle slippery conditions while offering more practicality and load space than a pick-up truck, for example.

Unlike the Transit Custom Active, the Trail version is offered in every body style available in the wider Custom range, so there are two lengths, two roof heights and the excellent five-seat Double Cab In-Van (also in two lengths) to choose from. The visual updates outside see the Transit Custom receive a makeover that takes inspiration from Ford's F-150 and Ranger Raptor pick-up trucks.

The standard three-bar grille is replaced by a matt grey honeycomb item with large ford lettering emblazoned across it. Lower down there is matt black body cladding for the lower half of the front bumper, which then follows the line of the wheelarches and continues along the van's sills. There's Trail lettering on the doors, while the black 16-inch 10-spoke alloy wheels are of a design that's inspired by the wheels on the Ford Ranger Raptor.

Step inside, and the Transit Custom Trail has more upgrades in store. It's a higher spec variant, so it gets full-leather seats with unique Trail branding, while standard kit includes front and rear parking sensors, a heated windscreen, air conditioning and touchscreen infotainment with smartphone connectivity. 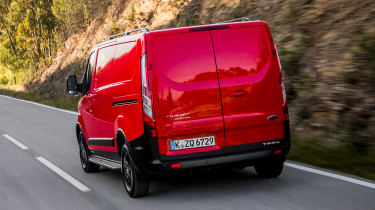 There's an addition under the skin in the form of a standard-fit Quaife mLSD limited-slip mechanical differential. This is designed to improve traction in slippery conditions by sending power to the front wheel with the most grip. It's the same diff seen in Ford's Focus ST and Fiesta ST hot hatchbacks, and it does largely the same job by improving traction and reducing torque steer when there's limited grip available. Add all-season tyres (an option at around £400), and the Transit Custom Trail is a pretty capable machine.

Power comes from the more powerful engines in the Transit Custom line-up. So there's a choice of 130 or 170PS (128 or 168bhp) EcoBlue diesels, while Ford's mHEV 48v mild hybrid system is offered with the more powerful engine. It's worth noting that the mLSD diff isn't compatible with Ford's auto gearbox, so all Trail models come with a six-speed manual gearbox. In terms of payloads, cargo volumes and fuel economy, the Transit Custom Trail is identical to the standard van, so there's no penalty to pay for its added kit.

We tried the more powerful model, and with the traction control turned off, it was clear that the mLSD helps the Transit Custom to get off the line easily. There's no scrabbling from the tyres, and the feel through the steering wheel stays solid as power is fed to the front wheels. Once on the move, the Trail is just as comfortable and accomplished as the rest of the Transit Custom range. This is a great driving van that offers plenty of power, excellent handling and a great view of your surroundings.