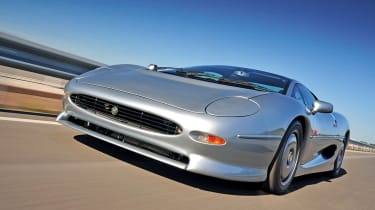 The XJ220 has an almost mythical status among Jaguar enthusiasts – but not for all the right reasons. It should have been the pinnacle of the firm’s road car range, yet it never fulfilled its potential.

The original prototype stunned the world when it was unveiled at the British Motor Show in 1988. Its ground-hugging shape, race-inspired aerodynamics and incredible V12 ticked all the supercar boxes. The spec list only served to whet the appetite even further – the promise of four-wheel drive and adaptive suspension had the motoring press in raptures. Jaguar received more orders for the £290,000 car than the proposed run of 220 cars (rising to 350), so success appeared to be assured.

Then came the problem of putting this one- off machine into production. It had originally been conceived out of hours by a team of employees known as the Saturday Club, but the task of making the XJ220 a production reality fell to race specialist TWR. When the final details were confirmed, the planned 6.2-litre V12 had been replaced by a less glamorous 3.5-litre twin- turbo V6, and the car was rear-wheel drive. The timing couldn’t have been worse, either, as a deep economic recession saw many would-be buyers trying to back out of the deal.

In the end only 281 examples were built, but the XJ220 was still a bona fide supercar with more than 500bhp and a 213mph top speed – enough to make it the fastest production model in the world at the time. Pictured here is number eight out of the 10 development cars. Driving at low speeds it feels heavy and cumbersome, but a flex of the right foot unleashes epic straight-line speed. It remains the fastest-ever Jaguar, yet the XJ220 has to go down as a missed opportunity rather than a roaring success.