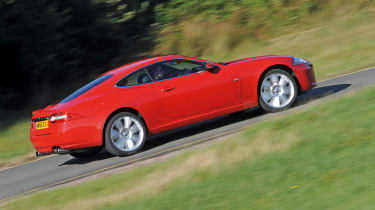 Having chosen the latest version of the XK as our Car of the Year in 2006, we’ve been big fans of Jaguar’s coupé ever since its launch.

It manages to combine elements of the marque’s glory days while still looking every inch the 21st-century machine. And with a lightweight aluminium chassis, the XK is faster, sharper and stiffer than the model it replaced – the XK8.

By delivering sports car handling along with the refinement and cosseting comfort of a traditional GT, this is one of the best coupés in the world. The interior is modern and more spacious than that of the model it replaced, although its rear seats are strictly for bags rather than people.

Classy mood lighting and lovely materials make the cabin a great place to be, and the latest generation features the distinctive rotary gear selector and pulsing red starter button first seen on the XF saloon. Other innovations include a pop-up bonnet to improve pedestrian safety, and adaptive cruise control. The standard and hot R model line-up remains, and as the XK was developed from the outset to be produced as a cabriolet, the open-top versions are just as accomplished.

Soothing on long journeys yet invigorating when you want it to be, the XK proves Jaguar still has the ability to produce a sports car that’s a match for the best in the world. Beautiful inside and out, it is a car to be proud of.

More importantly, it’s well worth its place in a line-up of Jaguar’s greatest models. As the first expression of design boss Ian Callum’s vision for the firm, it signalled the beginning of the styling renaissance the brand is currently enjoying.

WHY: Coupe took the company into a brave new design era