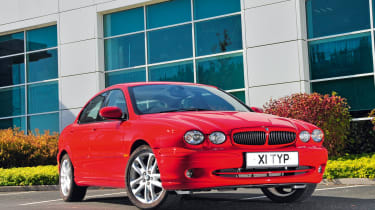 Surprised to see an X-Type in our line-up? Don’t be. While it’s not a big fans’ favourite, it marked several milestones for the brand. Not only was it the first Jaguar to be fitted with a diesel engine, the 2004 wagon was the manufacturer’s first production estate car, and the X-Type remains the only all-wheel-drive Jaguar ever made.

This model was designed to conquer the compact executive market, dominated by the BMW 3-Series, Mercedes C-Class and Audi A4. It was developed in record time – two years from board approval to production – and built away from Jaguar’s Midlands heartland at owner Ford’s Halewood plant on Merseyside. This, and the fact it shared some of its underpinnings with Ford’s Mondeo, got purists hot under the collar.

But the twin-headlamp design and rounded lines were a nod towards classic Jaguar styling. And under the skin, engineers worked hard to make sure there was a hint of the refinement and driver involvement you would expect.

Early models featured four-wheel drive, and there was a choice of 2.0, 2.5 and 3.0-litre V6 engines. Later 2.0-litre petrol and diesel cars were – to the horror of traditionalists – front-driven, but the 2.2-litre diesel launched in 2003 was arguably the best of the bunch.

While the X-Type didn’t succeed in making Jag a compact exec class force, it brought thousands of new customers to the brand. Plus, as the second best-selling big cat of all-time, it helped the firm survive to produce today’s stunning new models.

WHY: brand increased its mass appeal with compact exec.