‘Racy’ special takes hatch out with a bang. 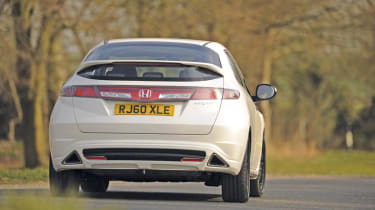 With no engine or suspension tweaks, the Civic Ti is simply an ordinary five-door family car with trendy paint and sharp alloys. Still, it’s good value considering all the extra standard kit, which  certainly makes it stand out. As for the rest of the package, it’s business as usual. The Honda is good to drive, but is showingits age. The Ford Focus and VW Golf are better all-rounders –  so we’re looking forward to the all-new version, due next year.

With no Type R planned for the line-up, the new Civic Ti is as exciting as Honda’s hatchback is going to get until the new model arrives next year. But is it enough to keep fans happy?
Inspired by the 2011 Honda Racing British Touring Car Championship racer, the model features pearl white metallic paint and a bodykit with spoilers and side skirts.
Video: watch CarBuyer's video review of the previous-generation Civic
[[{"type":"media","view_mode":"content_narrow","fid":"69199","attributes":{"alt":"","class":"media-image"}}]]
In a nod to the firm’s BTCC sponsor, the Ti also has black 17-inch Team Dynamics Pro Race wheels, matching mirrors and a Pioneer touchscreen sat-nav/stereo. Buy all those extras separately, and you’d be looking at a bill of £3,700.

Under the bonnet, there’s no fire-breathing engine. Instead, buyers can choose from two petrol units: a 99bhp 1.4-litre or the 138bhp 1.8 in the car we drive here. However, with a limited run of only 500 models and a starting price of £15,995, the Civic is not without appeal.
The visual tweaks are the main difference between the Ti and the SE on which it’s based. The paint – which matches that of the BTCC car – certainly turns heads, and works well with the contrasting wheels and mirrors.
Our model delivers 174Nm of torque, and doesn’t offer hot hatch pace, but is smooth and  fast enough for most drivers.
The only real dynamic change comes as a result of the rims, which give a stiffer ride.
The five-door’s emissions and fuel economy figures aren’t class-leading – a CO2 output of 152g/km means a road tax bill of £155 a year, while claimed consumption of 42.8mpg isn’t bad, but
trails most modern rivals. Inside, it’s rather dull. The two-tier dash is solidly built and logically laid out, but offers little in terms of visual appeal when compared to newer cars. Still, it does feel driver-oriented, and the Pioneer set-up is crammed with features such as Bluetooth hands-free phone connectivity.
Honda expects this £16,995 1.8-litre version to be slightly more popular than the 1.4, with only 200 examples of the latter being available. Either way, while this is no Type R, it looks great and is good value.
Share this on TwitterShare this on FacebookEmail