A new Honda CR-V is arriving in the UK in 2017, but will it be an improvement over its predecessor? We find out with an early drive... 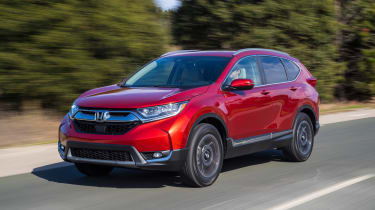 Honda’s new CR-V follows the path set by the previous version, with minor changes to styling and space and more significant updates to the cabin and powertrains. We like the new 1.5-litre turbo petrol engine, but the driving experience is a bit lacking. Still, in terms of sheer practicality, the new CR-V—like the old model —is difficult to beat. We’ll have to wait until UK pricing and specs are announced before we can see how competitive it will really be over here.

The Honda CR-V is not a major player in the UK, but it’s the best-selling SUV in the United States —Americans buy nearly twice as many CR-Vs each month as Britons buy in an entire year. So while UK buyers will have to wait at least 12 months before they can get behind the wheel of the fifth-generation CR-V, its already on sale in the US.

Given its success in America, it’s no surprise that the formula hasn’t changed. The underlying platform is new (and shared with the Civic), with a 40mm increase in wheelbase and a 30mm increase in length. But the styling is very similar to the previous-generation CR-V with visual updates most pronounced at the back, with taillights that extend into the tailgate and body-sides, and in profile, with reshaped lower-body creases. 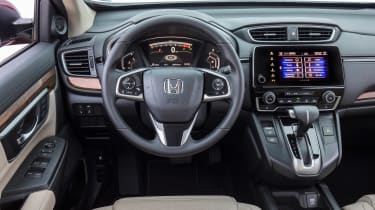 Inside, the changes are more substantial. The dashboard is made of soft-touch materials and the old analog gauge pod has been replaced by a digital display with a ribbon-style rev-counter and a digital speedometer. Climate controls and the touch-screen stereo stand apart from the dash on a handsome glossy panel, and Honda has finally fitted a proper volume knob.

Honda still use a Garmin navigation system, and it's slower and less intuitive than you’ll find in rivals such as the Skoda Kodiaq. There’s plenty of storage space, and aside from the awkward-looking plastic-wood trim in our top-of-the-range test car the overall design is cohesive and attractive.

The CR-V has never lacked for back seat space, and now there’s an extra 50mm of headroom. European boot measurements have not been released, but there is a small increase over the current car’s 589-litre load bay. Our test car had a power liftgate and a removable boot floor that can be installed in two positions: low to maximize load space or high to provide a flat floor when the rear seats are folded. As with the old CR-V, door-pull handles make dropping the 60/40 split seats a one-handed operation. 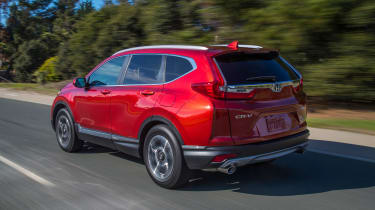 Our CR-V was powered by a new 190bhp 1.5-litre turbo petrol. However, with that engine also confirmed for European-bound Civics, it’s likely we’ll see this engine in UK-spec CR-Vs as well; a 1.6-litre diesel is also expected to join it.

The CVT transmission (the only choice for US buyers) solves the sluggish-shifting problem of the current CR-V’s nine-speed auto, though the engine staying at a nearly-constant speed under gentle acceleration can be disconcerting. Turbo lag is all but undetectable and passing power is excellent. We covered just over a thousand miles through California and Arizona, and our all-wheel-drive test car averaged 34.6mpg - not bad for a turbo-powered SUV, but if you're after efficiency the diesel will be the one to go for.

Out on the open road, the CR-V impressed us with its high-speed stability and refinement: it feels as calm and confident at 80mph as it does at 40mph. The adaptive cruise control system does an excellent job of matching the speed of cars ahead with no surging or hard braking.

The CR-V rides comfortably over rough surfaces, though it wallows on bigger bumps. Steering is light and accurate but lacking in feedback. We’ve heard rumors that the suspension won’t change much for UK models; given complaints about the old CR-V’s handling in our 2016 Driver Power survey, we doubt British drivers will be overly impressed.

Overall, the new Honda CR-V isn’t such a huge step forward over the current model. The interior is a big improvement, silly fake wood notwithstanding, and it’s hard to top the CR-V’s passenger space and practicality. But the interior lacks the posh feel of the Skoda Kodiaq and Kia Sportage and the driving dynamics are miles behind the Mazda CX-5.