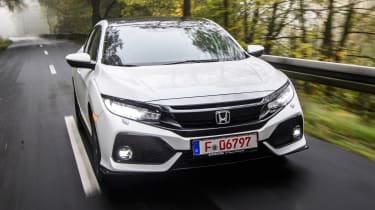 We need more hard data on the Honda Civic and a longer drive in it, but this feels like a car with potential. It marks a considerable step forward over the existing model, both dynamically and in the cabin – and should be enough to put the Civic back on the shortlists of family hatchback buyers.

Honda is readying an all-new version of its Civic hatchback to take on the Vauxhall Astra and VW Golf – and ahead of its launch in spring 2017, Auto Express has been to Germany to have a quick drive in a production-ready prototype.

The Japanese manufacturer has given the 10th-generation Civic an all-new platform and turbocharged VTEC engines in a bid to regain what it calls the Civic’s “distinctive sporty driving character”.

The underpinnings make greater use of high-tensile steel, tighter welding and tweaks to the manufacturing process to offer 41 per cent more torsional rigidity than the chassis of the outgoing model. Yet the new-generation’s structure is 16kg lighter – a feat that ought to improve both performance and fuel efficiency. 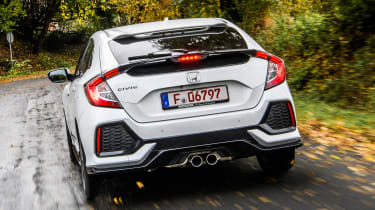 Perhaps the biggest sign of Honda’s sporting intent with the new Civic is the suspension set-up. The old car made do with a relatively simple and cheap-to-make torsion beam at its rear end, but the new model mixes MacPherson struts at the front with a new multi-link set-up at the back.

Honda says it will also offer adaptive dampers on high-end Civics – a tech feature that’s a first for the model, and still a relative rarity in the class.

At the heart of the new Civic are Honda’s first mainstream turbocharged VTEC engines. There’s a 1.0-litre three-cylinder unit that produces 127bhp at 5,500rpm and, unusually for a VTEC, its maximum torque of 200Nm at a modest 2,250rpm. Honda has yet to finalise fuel economy, but it’s predicting figures of around 60mpg and CO2 emissions as low as 104g/km. 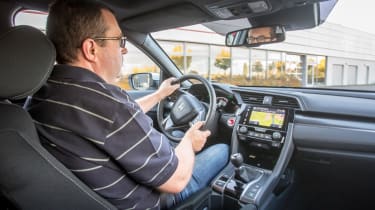 The standard gearbox across both engines is a six-speed manual, although Honda says it will also offer a re-engineered CVT transmission to give the Civic a two-pedal option. In autumn 2017, a 118bhp 1.6-litre diesel will join the range. It’ll also get the six-speed manual as standard, but its automatic option will be a conventional nine-speed torque converter.

The new car’s platform is longer and wider than the chassis of the existing Civic, and the wheelbase grows by 30mm – a move that’s designed to improve space for passengers, particularly those in the rear seats. The new car is 4,497mm long and 1,800mm wide, so about 12 centimetres longer than a Vauxhall Astra, but slightly narrower.

Our very early drive is in what Honda calls a “late pre-production car”. It’s one of the final examples made to check build quality at the factory in Swindon, Wiltshire, where all of the world’s five-door Civics will be churned out.

We try the 1.5-litre turbo manual in Sport trim – perhaps not the most mainstream model in the range, but one that gives us a good idea of how Honda has moved the car on dynamically.

And it really has. Our German test route is over broadly smooth roads, but there are enough potholes to show that the new Civic will cope with bumps much better than the previous car. This is particularly true when you traverse patched-up road that only affects one side of the vehicle. Before, this would have unsettled the rear end into a shimmy; now there is a clearly noticeable level of sophistication to how the car deals with it.

Our car had the adjustable dampers which can flick between ‘regular’ and ‘dynamic’ settings. In truth, the difference between the two modes feels pretty subtle, but the overall effect, regardless of the setting you choose, is that you can lean on the Civic in corners with some confidence. 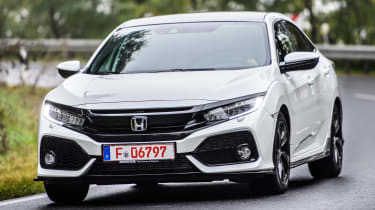 Body roll is well contained and while more rapid changes of direction aren’t helped by the longer wheelbase, it feels composed enough. We’re told the adaptive set-up will be offered on 1.5 Sport models only; there will be a conventional system on regular trims and all 1.0-litre cars.

The 1.5 is a sea change from any mainstream VTEC engine we’ve experienced before. It revs to beyond 6,000rpm, but in truth, you won’t need to go anywhere near that figure. Instead you can drive it almost like a diesel, using the decent spread of torque and admirably linear delivery to maintain smooth progress.

The gearbox is slick and doesn’t require much effort – a typically pleasing Honda arrangement, in fact – and the modulation on the brake pedal is easy to acclimatise to. It is an easy car to drive, and in the case of this spec, an easy one to drive swiftly.

The refinement on our late prototype needs a little work; there are a couple of dodgy seals around the B-pillars and the sunroof. But even so, it’s clear that the Civic’s engine will be a polite companion when cruising; it pulls about 3,000rpm at 80mph and while it’s not silent, it is smooth – plus it’s barely audible at all at 50mph. We rode in a three-cylinder Civic earlier this year and it appeared pretty refined. It’ll be interesting to drive the two back to back in due course. 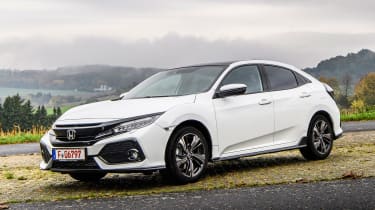 The Civic’s boot capacity remains impressive, at 478 litres; that’s over 100 litres more than you’ll get in an Astra. And on most versions of the Civic, there’s further storage below the boot floor. Only Sport editions do without it, because they get a central exhaust system instead of a design that runs down the side of the car.

The gain in size doesn’t exactly transform the Civic into a limousine; six-footers in the rear will find the sloping roofline does them no favours on headroom, although they’re unlikely to complain about cramped knees or legs. The boot is both large and well shaped, with not too much of a lip to worry about and a wide loading aperture. And while the much-loved ‘Magic Seats’ and their ultra-practical, foldable bases have gone, this still feels like a car that could cope with family life pretty comfortably.

Honda is using the Civic to introduce its next-generation CONNECT infotainment system, which is based around a seven-inch display and features Apple CarPlay and Android Auto functionality. It feels much more integrated into the vehicle than Honda’s previous systems, because CONNECT hooks up with the TFT display in the centre of the instrument panel, allowing you to use the steering wheel controls to flick between screens showing everything from navigation instructions and turbo boost pressure to text messages and E-mails. 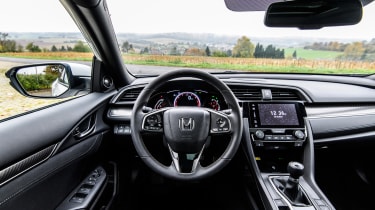 The whole dashboard is a much tidier affair than those found in recent Civics, too. The ‘two-tier’ display layout has been binned, replaced by a conventional instrument binnacle that mixes analogue dials with the large TFT display showing your speed and revs. It’s neat, clear and easy to use, with crisp graphics.

Euro NCAP has yet to put the new model through its crash tests, but Honda is confident of achieving a maximum five-star rating. Every Civic gets Honda’s SENSING safety line-up, including blind-spot monitoring, adaptive cruise control, lane departure warning and lane keep assist.

The new Civic is due on sale from next month, with deliveries starting in March 2017. Honda hasn’t announced specs or prices yet, but given the extra technology and the increase in size, we would expect a small increase over the existing car, with a starting figure of around £17,500.