The Japanese manufacturer is developing a hybrid powertrain with no physical transmission. We've been to test it 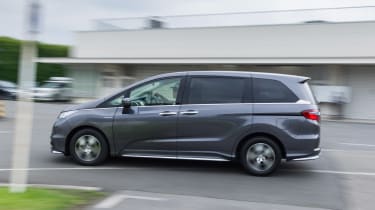 Honda’s two-motor hybrid system delivers diesel levels of economy while providing smooth electric motoring at lower speeds. There are still tweaks to be made before it arrives in showrooms, however - mainly focused on reducing engine noise under hard acceleration. But what‘s impressive about the system is how compact it is and the potential it has to be applied to much smaller vehicles in the future.

Honda is on the EV offensive and has stated that it will roll out hybrid technology across its model ranges around the world. Next year the brand will launch its new ‘two-motor’ hybrid tech in Europe, and although it has yet to confirm what form that model will take, it’s a safe bet that the powertrain will packaged into the all-new CR-V.

• The best hybrid cars on sale

The Japanese manufacturer invited Auto Express to its R&D facility in Tochigi, Japan to allow us to sample this latest hybrid system. If you are able to look past the boxy Odyssey MPV body, the hybrid system beneath is essentially what Honda will put on sale in 2018. 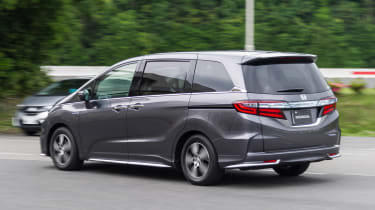 However, unlike a Toyota Prius or Hyundai Ioniq there is no physical transmission or gearbox. Instead, the missing transmission is replicated the by the engine and electric motors. Removing the gearbox dramatically reduces the size of the overall powertrain, saves weight and increases efficiency at the same time, according to Honda.

In the Odyssey we drove over 61mpg is claimed, but that figure should rise when fitted to the more compact and lighter CR-V compact SUV.

The system automatically shuffles between three driving modes depending on conditions: EV drive, hybrid drive and engine drive. From a standstill the Odyssey pulls away swiftly and silently. Development is still ongoing so the fully electric top speed is still unclear, but a maximum EV range of around two miles is unlikely to be exceeded before the battery is drained. 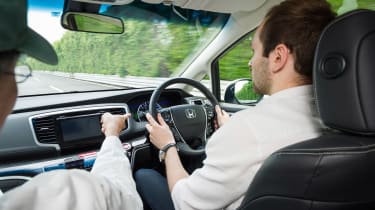 Accelerate gradually and power is fed in very smoothly, if rather noisily. In hybrid mode the front wheels are still being driven by the electric motor with the engine supplying power to the second motor (electric generator), which feeds the battery to power the wheels.

The whole system acts and feels very much like it’s using a CVT gearbox, with the engine revs spiking dramatically if you accelerate hard. Here, refinement is not the powertrain’s strong point but once up to speed and at a steady cruise, the engine takes over the power delivery, driving the front wheels via a small clutch to maximize efficiency. Ask for more power and the electric motors intervene to provide extra shove, but the engine becomes quite vocal once again.