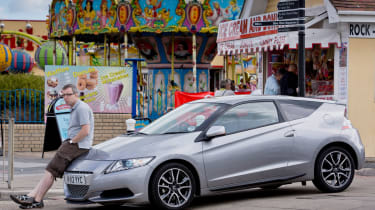 Where’s the fun gone? Even as a kid, I always felt seaside amusements never fully delivered the entertainment their bright lights and razzmatazz promised.

After six months with the CR-Z, I have to say I’m beginning to feel the same way about our Honda. And I’m not the only one. Across the office, most of my colleagues seem to share the view that the driving experience doesn’t live up to the sporty looks.

This wouldn’t be a problem if the CR-Z excelled at other things. But it’s a small coupe, so practicality isn’t a strong point, while a firm ride and plenty of road noise mean it isn’t the best choice when it comes to comfort or refinement on long trips.

Worse still, in previous updates we’ve commented on the fact that, despite its clever hybrid technology, the CR-Z hasn’t even been particularly efficient. However, here at least, we’ve seen some improvement. In the previous update, the Honda was barely creeping above 40mpg, but helped by a couple of colleagues borrowing the CR-Z for holiday trips that involved plenty of time on the motorway, our average over the past 2,000 miles has improved to 49.3 mpg.

However, buying a coupe is a decision of the heart not the head, so the fact that the Honda simply isn’t that much fun to drive is, for me at least, a serious flaw.

As we’ve said before, the CR-Z turns in sharply, but aside from the pointy steering, there’s little sense of being in a sporty car. After the initial keenness to enter the corner, the weight of the rear-mounted hybrid batteries comes into play, making the Honda feel heavy and sluggish.

Switching to Sport mode doesn’t improve matters, either. While it sharpens the throttle response and adds weight to the steering, it actually makes the accelerator pedal over-sensitive. And you’d be hard-pushed to feel any performance gain from the extra boost of the electric motor.

The CR-Z never feels quick enough, so I’ve found myself driving in Eco mode most of the time and thinking of the Honda as a green machine rather than a sporty coupe. Drive it with this mindset and it’s a little easier to appreciate. Yet the CR-Z is a car of contradictions, because for nearly every plus point, I can think of a corresponding negative.

For instance, I love the fact that it’s so well engineered, but the handling just isn’t responsive enough. I’m a fan of the tactile multifunction wheel, and robustly built cabin, yet I’m frustrated by the over-complicated dash and disappointed by the mismatch of trim plastics.

I like the low-slung seating position, but my knees brush the dash. The six-speed gearbox’s snappy shift is fantastic, yet the jerky throttle action makes smooth progress tricky in town. The list goes on...

Even the looks leave me in two minds. From some angles I think the car is great, from others I think it seems bloated and heavy. I’m not a fan of the silver-effect grille and carbon trim of our car’s £1,550 Dynamic+ pack, either. Also, limited rear visibility will be more of an issue in winter, when the screen gets dirty.

Yet, for all of this, part of me really likes this well built and different coupe. It’s just that, like those childhood visits to the funfair, every experience is tinged with a slight sense of disappointment.

“For a car that’s supposed to be stuffed with gadgets the CR-Z feels dated inside. The radio is poor and there’s no USB port.”Paul Bond, Road tester

“This car is utterly pointless. How about concentrating on delivering us a new Civic Type R instead?”Oliverb144, via www.autoexpress.co.uk