Are sporty hybrids like the Honda CR-Z really the future? 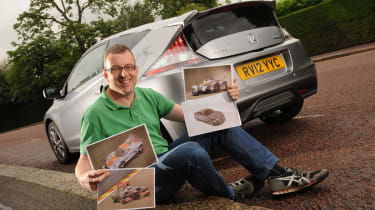 Performance-boosting hybrids are all the rage these days. Whether it’s Toyota’s Le Mans racer and KERS on Formula One cars on the track, or the latest concepts from Porsche and Jaguar, manufacturers are all jumping on the battery-assisted bandwagon.

Yet Honda is the only one currently offering an affordable hybrid sports car for the road: the CR-Z. So does the technology work in the real world, away from race circuits and show stands?

Well, yes and no. After just over 6,000 miles in our CR-Z, I’m impressed by certain elements, but disappointed with others. I enjoy the fact that, unlike most hybrids, this car uses a manual transmission – especially as the six-speed box has such a snappy action.

Yet I’m less convinced by the performance boost. Sport mode increases assistance from the electric motor, but the difference is small, with heavier steering and sharper throttle response being the most noticeable changes.

Plus, you’re constantly aware of the weight of the batteries in the back. This creates lots of body roll through corners, so the Honda doesn’t feel as agile as a sports car should.

And that’s my problem with the CR-Z. While the concept is good, it isn’t as fast and doesn’t handle as well as the best diesel hot hatches. And our 40.1mpg economy suggests it isn’t much more efficient, either. Even worse, it has a firm ride and is noisy on the motorway, while the over-complicated cabin and wedge-shaped styling divide opinion in our office.

On the plus side, it’s faultlessly engineered, as you’d expect from a Honda. And so far, aside from an errant wiper blade that worked loose in the seemingly never-ending rain of our summer, we’ve had no reliability issues.

There have been a few day-to-day niggles, though. Visibility isn’t great through the sloping rear screen, especially once the glass is dirty or wet, as there’s no rear wiper. And although the stop-start works well, you need to keep the revs quite high as you move away, otherwise the 1.5-litre engine has a habit of bogging down or stalling.

While I like the low-slung driving position, a lack of space means my knees sometimes rub against the dash. Plus, my only attempt at using the rear seats to carry two adults resulted in lots of trapped feet, bent legs and swearing.

Still, I’m excited by a future where hybrid technology helps to combine performance with efficiency. I’m just not convinced the CR-Z is the best example of the breed. But it’s early days yet for cars like this.

You have to admire Honda’s initiative in getting the CR-Z on the market while other manufacturers are content to limit their hybrid sports cars to the racing circuit and motor show stand.

“I find the CR-Z a bit hard to understand. It’s not sporty enough, yet it isn’t comfortable or practical, either. Still, I like some of the exterior styling details.”Otis Clay, Junior photographer

“Hybrid has a long way to go yet, but when it’s sorted, the efficiency gains will mean better performance for all cars.”burtondd, via www.autoexpress.co.uk