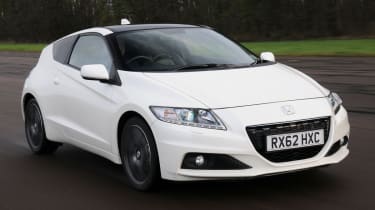 This is one of the more subtle mid-life refreshes we’ve seen: you’ll struggle to tell the new CR-Z apart from the old one. Behind the wheel things get clearer, with a slightly better driving experience. It feels faster and the Sport+ button adds some excitement, but the chassis still lacks the sparkle of a truly special car.

The Honda CR-Z hybrid didn’t exactly take the world by storm at launch in 2010. The petrol-electric powertrain was – and still is – a novelty for a sports car, but the coupe just wasn’t fun or fast enough to compete.

Now Honda has tried to iron out the Honda’s flaws with a subtle facelift, featuring tweaks to the styling and the mechanicals.

The visual updates are hard to spot. The grille is very subtly different, with a new mesh, while the air intakes either side of the front bumper are now larger. At the back is a subtly redesigned diffuser. Two new colours – Energetic Yellow and Aurora Violet – are now available, too.

Interior changes are limited, with revised door panels freeing up a little extra space in the bins. You’ll notice a new S+ button on the steering wheel as well.

And that brings us neatly to the powertrain. A new lithium-ion battery pack, updated motor and tweaked engine have raised power by 9bhp to 135bhp.

That steering wheel-mounted button works in a similar way to an F1-style KERS system – you press it to get an extra boost from the electric motor for up to 10 seconds. This provides a noticeable difference in the car’s acceleration – our top-of-the-range GT’s 0-62mph time has been reduced by six tenths to 9.5 seconds – but you still won’t be pinned back in your seat.

Economy and CO2 emissions are unaffected by the mechanical changes, although as our GT now rides on 17-inch alloys instead of 16-inch wheels, it returns 54.3mpg and emits 122g/km, compared to the pre-facelift car’s 56.5mpg and 117g/km.

The Honda drives in much the same way as before, with a comfortable – albeit firm – ride and impressive refinement. Unfortunately, the handling still doesn’t provide the spark that would make this a really involving sports car. It’s nothing to do with how capable the newcomer is – in fact, the CR-Z has plenty of grip through corners – but it feels a little too clinical and sensible in its approach.