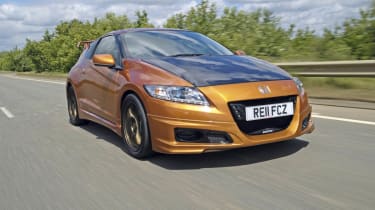 The CR-Z Mugen is not without its flaws. Although it can feel frantic to drive, it doesn’t seem as fast as Honda claims when overtaking – as you’re not aware of the supercharger’s power until you’ve built up speed. Also, while the styling turns heads, it feels aftermarket. Still, Mugen has tackled the CR-Z’s main criticism in a way that’s full of character, and we hear the car is likely to inspire an official production version.

The Honda CR-Z sports hybrid has never had the pace to live up to the promise of its looks. Realising this, Honda UK has commissioned its British-based tuner, Mugen Euro, to make a one-off special as an example  of what a high-performance CR-Z could be like.

Instead of junking the hybrid system, Mugen has boosted the existing 1.5-litre petrol engine with a centrifugal supercharger. This sees pulling power continue to increase as the revs rise, and promises, says Honda, Civic Type R-rivalling speed.

Mugen has also tinkered with the CR-Z’s looks, adding new spoilers, a rear diffuser and three vertical LEDs flanking the front number plate. A black carbon fibre bonnet contrasts with the metallic orange paint. The doors, too, are carbon fibre, and there are 17-inch lightweight forged alloys. This all slices 50kg from the regular CR-Z’s weight.

Inside, gauges showing oil and water temperature, plus oil pressure, emphasise the sporty appeal. The rear seats have been removed and the fronts replaced by lightweight Recaros, although these aren’t adjustable or very supportive, and feel quite narrow around the shoulders.

Press the red starter button and the exhaust instantly sounds more purposeful than the regular car’s. At 4,000rpm, the supercharger really gets to work, and acceleration is accompanied by an almighty whoosh – but the limited aural appeal at a slower pace means the CR-Z Mugen doesn’t feel as fast from 0-62mph as Honda claims.

The suspension has been revised, too. Adjustable dampers give a firmer, flatter feel through corners. The ride never jars, but the front tyres still squirm under acceleration, prompting the traction control light to  wink in first and second gears. And even though a limited-slip diff gives strong front bite into corners, it’s not hard to push the nose wide.

We left the Sport button engaged for most of our time at the wheel, keeping the  engine at its most responsive. Normal mode tames the reactions, while Eco dulls performance to regular CR-Z levels. Although Mugen says its modifications will cut economy to about 35mpg, we averaged nearly 40mpg –  better than the standard car, despite hard driving.

Honda believes this one-off cost £150,000 to build. However, with the changes inside and out, plus the exhaust, suspension and rims coming in at around £12,000, most of that went on developing the engine. And should the car make production, we estimate that it will cost £40,000-£50,000 –  which is more than twice as much as a regular CR-Z.