It’s not perfect, but like the classic Comet jet airliner, the Honda CR-Z points the way to the future 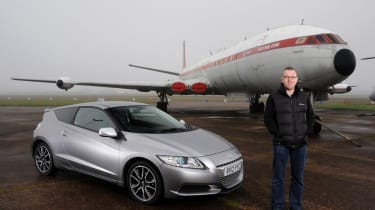 After 10 months on the Auto Express fleet, it’s time to say goodbye to our Honda CR-Z. But before it leaves, I brought it to meet a machine that I think it has quite a lot in common with.

The De Havilland Comet was the world’s first commercial jet airliner. With its mix of speed, refinement and efficiency, this beautiful aircraft set the template for all today’s modern jet-powered airliners. Yet from its first flight, this stunning machine was doomed to fail, thanks to one major design flaw and some smaller niggles.

And here’s the link. During our time with the CR-Z, it’s fair to say we’ve come to the conclusion that its power-boosting hybrid drivetrain hasn’t created the perfect small performance coupe. Yet the concept is sound and sure to become commonplace in future.

Just as people looked past the Comet’s failings and saw the merits of jet power, it’s easy to see beyond the CR-Z’s various niggles to a future where performance-boosting hybrid sports cars are the norm.

Okay, we’re not talking about a total sea change, like the switch from propellers to jets in aviation. But with manufacturers like Jaguar, Porsche, Ferrari and Lexus all set to launch hybrid sports cars soon, and Honda using the technology in the next NSX, the little CR-Z could one day come to be viewed as the first of its kind – just like the Comet.

Fortunately, the similarities don’t extend to reliability. While the mould-breaking De Havilland initially suffered from serious technical failures, our Honda has performed faultlessly. The complicated cabin and limited practicality have irritated on occasion, but no one has had any complaints about the engineering integrity of the hi-tech CR-Z.

It’s proved to be relatively fuel-efficient, too. Our overall average of 41mpg falls short of the manufacturer’s claimed 56.5mpg, but over the last 500 miles we’ve returned an impressive 48.1mpg. While those aren’t the sort of numbers to get Toyota Prius owners excited, they’re frugal enough if you judge the CR-Z purely as a sports car.

Yet evaluating the little Honda on those terms does it no favours, either. As we’ve said before, it simply isn’t that exciting to drive. So could a trip to the unrestricted spaces of an airfield track change our mind?

Unfortunately, as on the road, you don’t get much sense of the batteries boosting performance, and Sport mode makes the throttle over-sensitive. Sharp steering ensures the Honda turns in well, but the weight of the rear-mounted batteries causes plenty of roll over the rear axle, making the car quite sensitive to weight transfer.

There’s some fun to be had driving it on the limit, but as always the CR-Z demands dynamic compromises. Nevertheless, just as aviation enthusiasts remember the Comet fondly these days, I’ll always look back on the little Honda coupe’s positive aspects and respect it for being the first of its kind.

“The CR-Z is flawed, but it has potential. Stronger performance and sharper handling could transform the hi-tech coupe into a real class contender.”James Disdale, Road test editor

“There isn’t enough power to do the chassis justice, but you can wring the CR-Z’s neck and throw it through bends, and it’ll still return 38mpg.”Kenny May, via www.autoexpress.co.uk