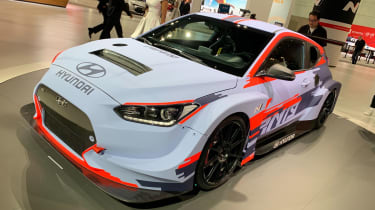 Hyundai has signalled its intentions to launch a performance-based, halo model with the reveal of the RM19 concept. Shown for the first time at the LA Motor Show, the running mid-engined prototype packs 390bhp and previews the future direction for Hyundai's N brand.

The name, RM19, refers to the prototype’s ‘Racing Midship’ configuration, something which Hyundai claims will give the vehicle “supercar-level handling balance.” The RM project has been in the works at Hyundai since 2012 and resulted in three different concept cars. The difference with the RM19 is that it’s a running prototype and Auto Express has had an exclusive first drive.

The prototype is driven by a 2.0-litre four-cylinder turbo taken from Hyundai’s TCR racer and also carries over that car’s six-speed sequential gearbox and rear-wheel-drive setup. In the RM19 it develops 390bhp and capable of a 0-62mph time of less than four seconds. 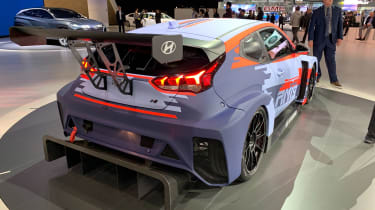 However, the 2.0-litre turbo is not necessarily the powertrain that will appear in the production car. Hyundai has said that “state-of-the-art electrified powertrains could provide clean, yet thrilling propulsion” in the future. The Korean firm cited its recent investment in Rimac Automobili and the electric prototypes it is currently developing with the high-performance EV company as a possible avenue for the RM19.

Expect to see a much closer-to-production prototype, likely called the RM20, next year.

What do you make of Hyundai's performance future? Let us know your thoughts in the comments below...