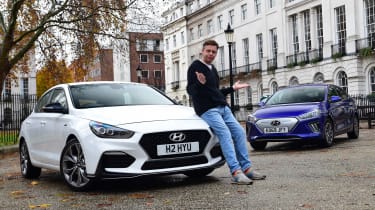 Electric cars are different from petrol and diesel ones, and that becomes clear even before you’ve sat in one. From range and charging infrastructure, to government tax breaks and miles per kilowatt hour replacing miles per gallon, moving from fossil fuels to electric power requires a change in mindset.

When you get behind the wheel of an EV, even more differences emerge. The silent running, the instant torque, the regenerative braking – electric cars have intrinsic character differences when compared with their counterparts, and require different driving styles.

But how do these differences impact drivers and how they drive, and is it a positive change? In the hope of finding answers to these questions, Hyundai came to us with a proposition. The firm presented us with two cars – one a pure-electric Ioniq, the other a petrol-powered i30 Fastback – and asked politely if they could hook me up with a blood-pressure monitor and track my eye movement during a pair of 30-minute drives, one in each car.

It wouldn’t be just me that was wired up. The cars would be rigged with pressure pads on their steering wheels, accelerometers and all manner of other sensors. The measurements gathered by these instruments would, together with the assessments of an observer sitting in the passenger seat, generate category scores in five areas: awareness, ability, confidence, efficiency and calmness. The experiment is called Drive Different and its aim, it almost goes without saying, is to look at how my driving changes as I switched from one car to the other. 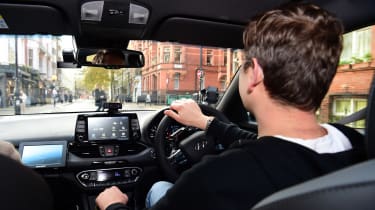 The day gets off to a bad start, with the cars held up by traffic on their way to the office and rain pounding London’s streets. But soon I’m hooked up; the heart-rate monitor is an unobtrusive bit of kit like a wristwatch, while aside from pressure-pad covers on the cars’ steering wheels and pupil-tracking cameras on their infotainment screens, all seems fairly normal.

We take the i30 Fastback first. Following a preset route around central London, I chat away to my observer. Traffic is light, the rain is easing up and things seem calm. My observer asks what make of car just turned off the road ahead, and while I saw the car make the turn, I didn’t clock the model – “some kind or Eurobox”, I replied, annoyed that I’d almost certainly just dented my ‘awareness’ score.

Soon, things turn grim. The rain reappears and, worse still, we enter an almighty traffic jam. We’re barely moving; 10 minutes go by and we’ve crawled 100 yards or so. A further 10 minutes and things are no better. Traffic is moving enough for me to have to keep dipping the clutch as we edge forwards, while the engine’s stop-start system is stuck in a never-ending cycle of irritating activations. It doesn’t feel like we’re making any kind of meaningful progress at all, and I can feel my stress levels rising.

Mercifully, traffic eventually clears, and we reach the changeover. We’ve wasted 45 minutes stuck in the jam, making the rest of the day rushed. Our observer is under pressure to get to her next appointment, and photographer Pete is having to work around the weather to get our pictures. 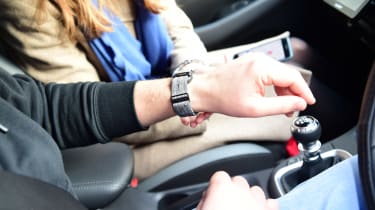 Climbing into the Ioniq EV isn’t at the top of my list of priorities. It’s well past lunch; it’s been raining all morning; I’ve just been sat stationary for the best part of an hour. Truth is, I’m grumpy and want to get back to the office.

But as soon as we’re on the move, I feel better about things. The alleviation of the traffic jam certainly plays a part in this – our route is clear, and it’s nice just to be able to move freely around the city. But it’s also nice not to have to keep depressing a clutch and stirring a gearbox between its first three or four speeds; at traffic lights I simply glide to a stop in silence, the Ioniq’s regenerative brakes allowing me to pilot it almost on the accelerator alone. The lack of a stop-start system and engine interrupting things is perhaps the greatest improvement over the i30 Fastback, though. I feel calm, peaceful and content, and the electric portion of the drive goes off without hitch or incident.

Our test took place solely in town, and while I would be keen to take an extended run across a variety of roads in both cars, one of the points I garnered from this test was just how good EVs are in an urban environment. Cars in central London don’t make a great deal of sense at the best of times, but given how bad traffic was during the petrol-powered portion of our drive, the quiet, smooth, stress-free Ioniq really did feel like the ‘right’ car to be driving. Knowing we weren’t adding to London’s pollution problem was another aspect that played into this feeling.

Having handed back the keys to the Ioniq and unhooked myself from the heart monitor, did the measurements from the various gizmos and our observer chime in with my observations? Well, I had to wait for a day or two for these to come through, but you only need look at the second panel to your right to find out.

How Drive Different project was devised 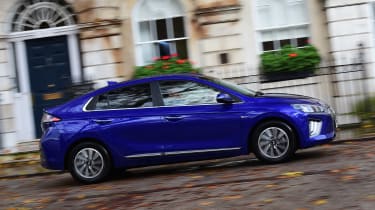 Hyundai teamed up with academics and driving experts for the Drive Different project, and during the course of its research (which saw 2,000 motorists surveyed) noted there were distinct differences between drivers of hybrid and electric cars, and those in petrol or diesel ones.

Gary Lamb is one of the brains behind Drive Different, and has more than 30 years experience as a driving instructor. He trains instructors and has a Class One HGV licence, and explained why he thought there was a difference.

“People drive electric cars differently for a number of reasons”, Gary said. “Driving styles change as the way people operate a vehicle changes. Subconsciously, they may feel they’re in a vehicle with what may seem like a limited range per charge, so they’re less inclined to accelerate and brake as sharply.” As well as making people smoother, Gary also thinks EVs can make safer drivers. “If you want to make the most of the regenerative braking on offer, you think more about space management and your surroundings, so you think more about what’s ahead.

“Another thing that’s changed is a lot of people are becoming fed up with pollution. In the past you might not worry about this, but now you look at the smoke coming out of cars, and think: ‘people are breathing that in’.” 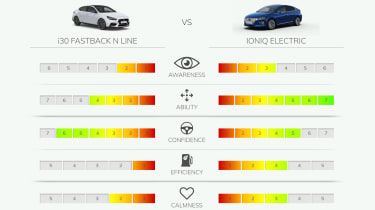 The five analysed areas were determined by a number of factors. Awareness was based on how often the pupil-tracking camera saw me look through the windscreen and at the mirrors, while Ability was gauged by the frequency of sudden stops and starts; my observer’s reports played a part in both these areas, too.

Confidence was based on how tightly I gripped the steering wheel, how quickly I took corners, and how firm I was with the accelerator, while Efficiency was judged against the cars’ official economy. Finally, Calmness came from my heart rate, how tightly I held the steering wheel, and my facial expression. Hyundai did say that my Ability score in the i30 may have been ‘tricked’ by the heavy traffic jam, but I’ve no excuse for the low Awareness scores – must try harder. Turning to Calmness, I was certainly more relaxed in the Ioniq, as you can see in my scores, while that jam decimated my Efficiency marks in the i30; three out of five here for the Ioniq could be better, but I’ll be the first to admit that I could do with a lighter right foot.

As for Confidence, the amount of time I’ve spent controlling internal combustion engines with my feet is far greater than the length of my experience in electric cars, so it’s not too surprising I was more at home in the i30.

What are the best electric cars on sale? Click here for our top 10... 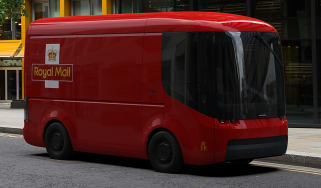