Can the Korean company's new city car build on the success of the firm's excellent i30 family hatch? 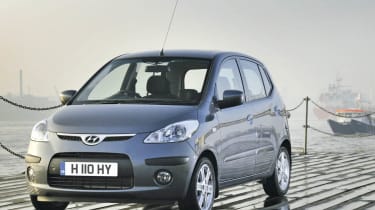 With the i30, and now the i10, Hyundai has perfected a formula for producing solid, well styled cars which it sells at startlingly good prices. Build quality is sound, it’s entertaining to drive and, above all, represents outstanding value for money. The noisy 1.1-litre engine doesn’t work in its favour, but when you consider the Hyundai’s spacious interior, neatly judged design and practical load space, the established manufacturers in both Europe and Japan have a lot to worry about.

Last year, Hyundai went upmarket with its excellent i30 hatch-back. Now, the Korean company is back – offering a new supermini which it says will deliver big quality at low prices.

The i10 replaces the ageing Amica, and promises a class-leading specification, five-year warranty and starting price of only £6,495. It certainly looks tempting, but does it have the style and substance to take on rivals from Europe and Japan?

There’s no denying it’s generously equipped. Air-conditioning, four air-bags and an MP3-compatible CD player with six speakers are standard on the entry-level Classic, with the mid-range Comfort adding enough extra kit to justify its £600 premium.

There’s also a Comfort Auto model for £7,895, although the range-topper is the £7,595 Style, which has 15-inch alloys, a rear spoiler and a sunroof. All variants use a 65bhp 1.1-litre engine which returns 56.5mpg com-bined, and has low enough emissions to be exempt from the revised London congestion charge, due in October.

On the outside, the front is fine – even cute. From the door handles back, however, it’s clear that style has lost out to function on the five-door-only supermini. But the newcomer is well built, and there are no signs of cutting costs. Even the cabin – usually brittle and flimsy on budget models – is durable and robust. It’s also stylish, although the funky colour inserts on the dash and seats won’t feature on UK cars. Still, boot space is excellent and rear passenger room plentiful.

The best seat is the driver’s, where chunky controls enable you to exploit the weighted and responsive steering, progressive brakes and tidy gearshift. It’s not especially fast, but it’s fun.

In the city, great all-round visibility and responsive controls make man-oeuvres easy. And there’s no need to avoid motorways, either, because the Hyundai is happy in any lane.

The only real flaw is the i10’s rowdy powerplant. When it’s at the top of the rev range, it makes more noise than performance – particularly with the auto box – and on inclines, it can struggle. Thankfully, a new 74bhp 1.2-litre petrol unit arrives later in the year. Yet in every other way – from build quality to standard kit, and interior space to overall style – the Hyundai easily beats Kia’s £6,759 Picanto and the £6,245 Chevrolet Matiz.

It faces a tougher battle with some of the more established names. The i10 isn’t as athletic in corners as the £8,499 Mazda 2, and it’s not as cute as Toyota’s £7,195 Aygo. All the same, the i10 does a great job of showing how far the brand has come.