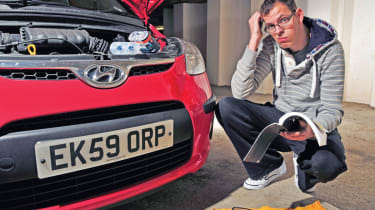 It was my bright idea – but fitting new headlamp bulbs to our long-term Hyundai i10 proved more complicated than I’d imagined!

The city car has impressed us with its long list of standard equipment, yet there is always room for improvement. As Auto Express’s consumer writer, I get to look at all kinds of kit – and after viewing the latest in illumination technology, I saw the light. Our Korean baby doesn’t use xenon headlamps or High Intensity Discharge (HID) bulbs, so I decided to find out if I could improve the headlamps’ output using aftermarket units instead.

I thought fitting the new pair of Osram Night Breakers would take only a few moments. But how wrong could I have been? It’s a really fiddly process – which is not made any easier if you try reading the car’s manual.

This claims you can access the light units from under the bonnet, but I thought I’d need to remove the front wheelarch liner! Bending this out of the way requires a lot of force, so I took the cautious approach and drove the i10 to my local Halfords, in Watford, Herts, to get the bulbs fitted professionally.

It was money well spent.

Even though I hadn’t purchased the Osrams from the store, the mechanics installed them for £5.99 each. So, for a meagre £11.98, the i10 now has a pair of powerful new headlights. I’ve yet to try them on an unlit rural road – surely the ultimate trial of any headlamp – but they look brighter than the old halogen units when shone against a workshop wall.

The light they produce is also much whiter than before, so I look forward to putting them to the test. However, with the clocks about to go forwards for British Summer Time, I might have to bide my time. I’ve still got lots to do in the i10, though – the new headlamps are only the first in a line of jobs I have planned. Next up is a bit of TLC, as the windscreen has picked up a chip that I’m determined to prevent from turning into a full-blown crack. The dirty paintwork is also set to get treated to a spruce-up.

Even with a chipped screen, the i10 continues to impress.

Our long-termer saw off rivals including the new Chevrolet Spark to take victory in our group test – and I couldn’t agree more with our verdict. The team praised the Hyundai’s generous equipment, and as the weather hopefully improves I look forward to using the electric sunroof a lot more than the heated front seats!

As I spend a lot of time testing products, the 12-volt socket is well used, and I really appreciate its easy-to-access location in the cabin. Plus, while the i10 isn’t the most practical car on our fleet, I like the storage cubbies under the radio, down the centre and in the door panels. They are more than big enough to accommodate the assorted sweet packets, pens and drinks bottles that are part and parcel of using your car for the daily commute.

Unlike in the Suzuki Alto I used to run, the glovebox also has a proper lid, so its contents aren’t on permanent display. But while the stuff I carry with me is no longer visible, the i10’s new headlamp bulbs mean the road ahead of me is much more so.

“Jamie borrowed my long-term Peugeot 3008 for a recent house move, meaning I got the chance to sample the delights of his i10. I think it’s a great city car, and I even managed to fix the broken parcel shelf!”