The Hyundai i10 is one of the best cars Hyundai has ever produced - it's good to drive, well-equipped and extremely refined 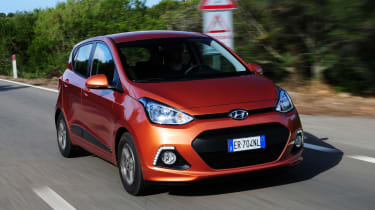 With the Hyundai i10, it's definitely a case of third time's a charm. Not only is it right up with the best in its class, the supermini is one of the best cars Hyundai has ever made. It’s well equipped, good to drive and incredibly refined. What’s more, the Hyundai i10 is the first of 22 new Hyundais that’ll arrive in the next four years. Great for car buyers, less good for its rivals.

The Hyundai i10 shot into the nation’s car buying consciousness thanks to the scrappage scheme, launched by the government to keep us spending cash on new cars. But the all-new five-door-only model is quite a different proposition to the cheap, cheerful but rather basic city car it replaces. In fact, Hyundai describes it as giving B-segment value in an A-segment package, even though the entry-level car costs exactly the same as its predecessor. So should the Skoda Citigo be worried?

Marketing spiel is one thing, but as soon as you drive the new i10 you’re struck by just how grown up it feels. Our test car is powered by the 1.0-litre three-cylinder petrol that’s expected to account for around 60 per cent of sales. It’s essentially the same engine that’s in the latest Kia Picanto, but thanks to a big slab of sound insulation on the bulkhead and double seals around all the doors, it’s nice and quiet – much better isolated than in its sister car.

The engine revs freely, but any noise that does permeate the cabin is always pleasant, whether its at a low rev thrum or at higher engine speeds, where the noise generated is just enough that you can pretend you’re powering along in a cut-price Porsche, albeit with half the cylinders. The claimed 0-62mph time of 14.9 seconds doesn’t quite do the car justice, either. It’s no performance car – it just sounds oddly like one – but as long as you keep your momentum up, anticipating traffic or steep inclines as quickly as possible, the i10 has no problem keeping up with other traffic.

Helping this process is five-speed gearbox with a slick shift and well-judged gear ratios that help you make the most out of the engine’s small power output. However, drive enthusiastically, and you’ll find the 40-litre fuel tank drains quite quickly. As well as being quiet, the i10 rides nicely, too. It comes with 14-inch rims as standard, wrapped with fat 65-profile tyres. Combined with the soft, supple damping, the supermini has a plush ride that’s reminiscent of a car from the class above. It copes well with large undulations, and isolates smaller cracks and bumps in the road with real class, minimising any jolt sent through the cabin. It does roll quite a bit in the bends, but the impressively comfortable ride is more than a fair trade-off.

As you’d expect from a car that’s designed primarily for urban use, the i10 has great visibility, particularly out of its large windscreen, and a tight turning circle. The steering is very light, but it’s direct and actually has some feel, allowing you to place the car with ease on the road. The brakes are good, too. They’re discs all round, which is rare for a supermini, and while they’re a little grabby, the power they provide is great.

The i10 is a little wider and longer than before, but a little lower. However, it still boasts impressive cabin space for such a small car. There’s room for two adults up front with ease and just about enough for them in the rear, too. It takes a while to get the driver’s seat position spot on though, as the steering column only adjusts for rake, not reach. All four doors open nice and wide, and have big pockets that can swallow a water bottle, while the centre console and glovebox have space for phones, portable sat-navs and more.

Hyundai has been smart with the trim materials, as everything you touch – the wheel, gearknob, buttons and knobs – are made from posh plastics, while the dash and centre console are made of harder stuff. The contrasting colour that runs across the dash is a nice touch, and links the design of interior and exterior well. The instrument cluster is a bit basic, but you can compliment the large-car driving experience with more toys, like a heated steering wheel, auto climate control and cruise control, if you like.

The boot is a decent size, too. The tailgate springs up to reveal a 252-litre, rectangular space – a whole litre bigger than the Citigo family – which can swell to 1,046 litres with the rear seats folded flat.

The exterior design isn’t the most exciting from the front, although the swept-back headlights and LED daytime running lights add some interest. The profile has a nice curve to it, similar to the latest Clio, while there has a whiff of BMW 1 Series about it, with its concave shape.

So although the i10 might have hit the big time thanks to scrappage, the new car doesn’t need a government discount to incentivise its purchase. Although Hyundai makes bold claims about the new model, its refinement, quality build and driving experience really does make it feel like a car from the class above. Perhaps even more so than the game-changing up! family.