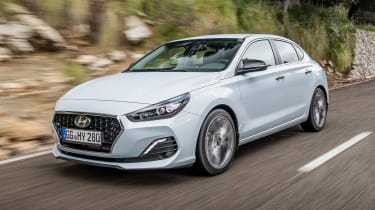 A strangely good looking new take on the i30 hatchback, but not a car that will rewrite any dynamic rules any time soon. Styling tweaks are impressive, however, and no one could argue with the specification, quality, value or packaging of the i30 Fastback. Ultimately, however, the five door coupe remains an anomaly, despite what Hyundai might want us to believe.

Five-door coupes don’t tend to appeal to vast audiences in the UK. Some would say for good reason, as they seem provide the answer to a question that no-one is terribly interested in asking. But Hyundai believes it has come up with a fresh take on the genre with this; the new i30 Fastback.

It’s based unashamedly on the i30 hatchback, and this particular version is powered by Hyundai’s 1.4-litre, four-cylinder turbo petrol engine with 138bhp and 242Nm. There will also be a cheaper 1.0-litre three-cylinder model with 118bhp and 171Nm, and in the fullness of time these two will be joined by a 1.6-litre diesel.

Visually, the Fastback differs from the regular five-door in a number of ways. There are minor tweaks to the front and sides, but a major rethink of the final third gives the car a much more rakish appearance without losing out on boot space. In the flesh, it looks smart, and a fair bit more arresting than the hatch – especially on big 18-inch wheels and tyres. 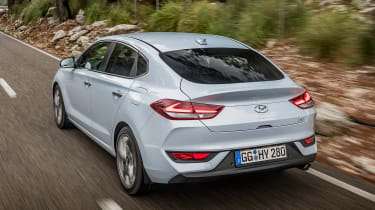 Don’t think of the Fastback as a genuinely sporting Hyundai, however, because although it has a reasonable turn of speed (0-62mph in 9.2sec and a 129mph top speed) it falls someway short of the i30 N hot hatch. That’s intentional, though, and leaves room for a high-power model later down the line.

Beneath the skin, Hyundai has made a series of small but significant tweaks to the running gear to provide the Fastback with a unique driving experience, however. The springs are 15 per cent stiffer all round, the roof height 30mm lower and the entire car sits five millimetres closer to the ground. The body shell is wider at the back thanks to restyled rear wheel arches, although the track widths remain unchanged.

The gearbox in the car we tried was the six-speed manual but there will also be a seven-speed DCT option. The former works well enough, with clean shifts up and down the ratios, while the engine displays little lag or noise – with plenty of thrust from around 2,000rpm onwards. It’s an effective engine, rather than a brilliant one, however.

The same goes for the chassis, steering and brakes. The Fastback handles and rides neatly, tidily, comfortably, and has absolutely no vices up its sleeve on or near the limit. But at the same time it never really touches on brilliance in any area. 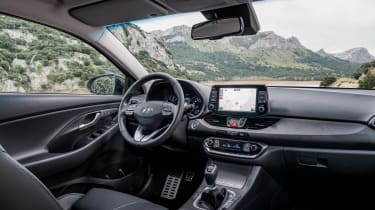 There are various trim levels, starting with the SE Nav, rising to Premium SE as tested here. It feels like a quality product, too, with a sense of genuine precision to the switches and main controls that is now every bit a match for the best European models at this price level. In this trim brings a high level of equipment that includes a simple but intuitive touchscreen infotainment centre and a full connectivity package that includes Apple CarPlay and Android Auto.

It works extremely well in practice, plus there are a host of safety features engineered into the car that are usually the preserve of far more expensive and luxurious machines. Kit such as adaptive cruise control, forward collision avoidance, driver attention warning, blind spot collision warning and lane keeping assist are all included.

But it’s the space in the rear seats that is usually the bane of the five-door coupe. In this respect however the Fastback is surprisingly un-compromised, with as much legroom as the hatch and very nearly as much headroom. We put a six-foot passenger behind a six-foot driver and there was just about enough space for both. The 450-litre boot is (on paper) even bigger – with  the same floorspace and only a fraction less height.