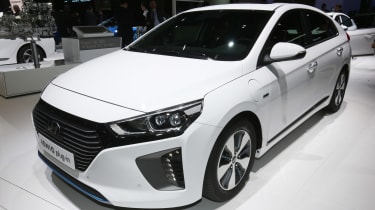 Hyundai has completed its line-up of bespoke electric and hybrid vehicles by launching the Ioniq Plug-in at the 2017 Geneva Motor Show.

The Ionig Plug-in joins the Ioniq Hybrid and Ioniq Electric in the Hyundai range. The new model uses a 1.6-litre petrol engine producing 103bhp and 147Nm, and an electric motor offering 45kW. Hyundai claims the combination can deliver pure-electric range of up to 63km, and drops CO2 emissions to just 26g/km. By comparison, the standard Ioniq Hybrid emits 79g/km - but Toyota’s latest Prius Plug-in manages 22g/km.

As with the Ioniq Hybrid, the Ioniq Plug-in uses a six-speed dual-clutch automatic transmission instead of a CVT or torque converter. It also gets the same suspension configuration as its stablemates, with a multilink set-up at the rear. Hyundai says that despite the Plug-in’s efficiency mantra, it will offer different driving settings, including a Sport mode that will alter the power steering and transmission software. 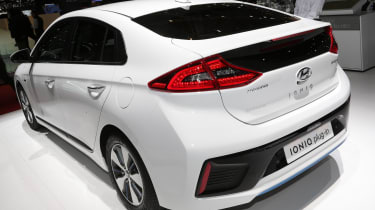 The exterior design of the Plug-in is, in effect, the same as the regular Hybrid, so it retains that car’s ultra-slippery shape, with an aerodynamic drag co-efficient (Cd) of just 0.24. There’s an additional flap on the front wing, allowing the car to be refuelled as well as recharged - and the Plug-in gets a flash of blue material at the base of its front bumper, instead of the regular Hybrid’s dark grey finish.

Hyundai has not confirmed how long the Ioniq Plug-in will take to complete a full charge - or issued any performance data. Nor has it released a price, but the car is expected to slot in between the Hybrid and the Electric in the line-up - so we’d expect a starting figure of around £24,000.

Would you choose a Hyundai Ioniq over a Toyota Prius? Let us know below... 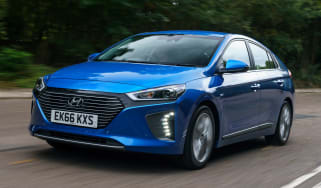