We drive the new Hyundai Kona in the UK. How does it stack up against the raft of small SUV rivals? 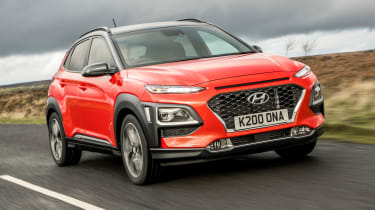 As expected, the cheaper Hyundai Kona SE offers bags more appeal and better value for money. Mid-spec models come with all the kit you’ll need, and thankfully miss out on the ride-ruining 18-inch wheels. You’ll still have to compromise on boot space, however, with almost all of the Hyundai direct rivals beating the Kona for outright practicality.

It is only a matter of weeks since we drove the all-new Hyundai Kona on European roads. Our first taste of the brand’s baby crossover left us a little cold, however. While it didn’t too all that much wrong, it struggled to offer anything out of the ordinary, either.

However, the car we drove was a high-spec turbo petrol in Premium SE guise. That version sat on big 18-inch rims, but given a more appropriate spec and wheel combination, we suggested the Kona could conceivably be worth a fourth star. As things stood, the smallest Hyundai SUV was middling at best.

Now, though, we’ve got the more sensible SE model back in the UK. This version is £3,700 cheaper and sits on standard-fit 17-inch wheels. It still comes with a seven-inch touchscreen, Apple CarPlay and Android Auto, as well as all-round electric windows and a reversing camera. Yet on one of Hyundai’s competitive PCP plans, it’s £36 less per month when you put down a deposit of just over 20 per cent. 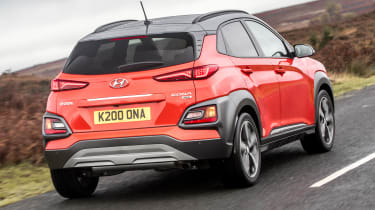 The good news is the smaller wheels manage to soften the car’s ride without an adverse effect on handling. Hyundai N boss Albert Biermann previously insisted that even the brand’s crossovers and SUV would have fun instilled from the start – and after a lengthy drive across some of the UK’s most challenging roads, it appears he was telling the truth.

Body control is good, and the steering is really rather weighty. We’d prefer a bit more feel through the wheel, but grip is excellent, even in the wet. Where the larger wheels crashed over potholes, the 17s seemed much more settled. If you’re happy to sacrifice on style, they appear far more suited to our troubled tarmac.

The three-cylinder engine packs plenty of punch, too. It’s the same unit as in our European test car, and with 118bhp it’s among the more powerful cars in this class. On paper, it’s slower than the entry-level 93bhp SEAT Arona, but it feels quite a bit quicker than the numbers suggest. The six-speed gearbox offers an additional ratio, too, meaning it’s quieter at high speeds. 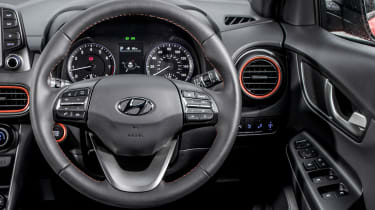 However, many buyers will find themselves drawn to cars like this due to the prospect of added practicality. Hyundai will look to tempt customers from superminis and small family cars, but when it comes to outright practicality, rival models have the edge.

All Kona models apart from the entry-level S get a space saver spare wheel, and as a result, owners must make do with a miserly 334-litre boot. If you’ve got small children, that simply won’t suffice. A Citroen C3 Aircross boasts up to 510 litres with its rear bench slid forward. Space in the back is fine for adults, though an Arona offers more headroom.

Competitor cars look cheaper to run, as well. A Peugeot 2008 PureTech 110 emits just 103g/km of CO2, while claimed fuel economy of 64.2mpg beats the Kona hands down. There’s no benefit of switching to the smaller 17-inch wheels, either; in T-GDi guise as tested here, it’s only slightly more economical than the soon-to-be-replaced Nissan Juke 1.2 DIG-T.

The Kona’s cabin is solidly built, and while there are a few scratchy plastics lower down, everything feels well laid out and the switches operate with a quality feel. The responsive touchscreen is a pleasure to use and the menus are easy to navigate. The small additional display between the dials shows up relevant trip info, too.