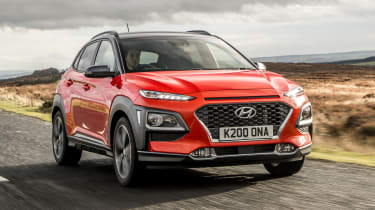 Hyundai’s new diesel-powered Kona will cost from £19,750 in the UK. Powered by a 1.6-litre engine, the model lines up alongside regular petrol versions and the Kona Electric in the range.

The diesel is offered in a choice of two power outputs, both of which slip between the existing 1.0- and 1.6-litre petrols in terms of performance. The entry-level unit makes 113bhp and 280Nm of torque, which enables it to cover the 0-62mph in 10.7 seconds. The 134bhp and 320Nm of the higher powered model allows it to achieve the same benchmark half a second sooner.

Both models send power to the front wheels. The 134bhp model is exclusively available with a seven-speed dual-clutch automatic gearbox, while the 113bhp unit is six-speed manual only.

The Kona diesel has been tuned to comply with the latest Euro 6d TEMP regulations. An AdBlue exhaust treatment system, an NOx filter combine with the standard diesel particulate filter, to help the Kona achieve claimed figures as low as 111g/km for the 113bhp model, and 114g/km for the higher-powered version.

The diesel models follow the same trim lineups of the rest of the Kona range, with both available in all three SE, Premium and Premium SE trims. Available in 10 exterior colours, the higher two of the three trims are optionally available with a contrasting roof.

Read: the new Hyundai Kona Electric will cost from £24,995, the company has confirmed… 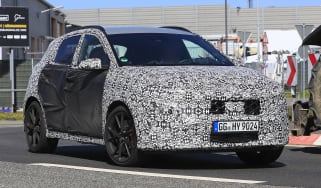 The Hyundai Kona has funky looks, but the driving experience is firmly in the middle of the pack
New Hyundai Kona Hybrid to cost from £22,495 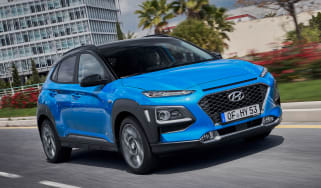