New Hyundai Kona small crossover will take on the likes of the Nissan Juke and Citroen C3 Aircross, and is on sale from November 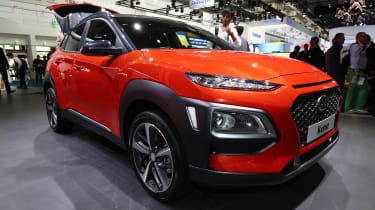 Prices and specifications for the Hyundai Kona have now been revealed, and UK buyers will be offered the Korean firm’s Nissan Juke rival from £16,195 when it goes on sale in Britain early in November.

At launch, buyers will be restricted to turbocharged petrol models only: A 1.0-litre three-cylinder unit with 118bhp lines up alongside a perkier 1.6-litre four-cylinder with 175bhp and a seven-speed manual gearbox feeding power to an all-wheel-drive system. A new generation 1.6-litre four-cylinder diesel powertrain will be added to the line-up within a year of launch, with either 113bhp or 134bhp. The more powerful diesel option will be offered with all-wheel-drive too. 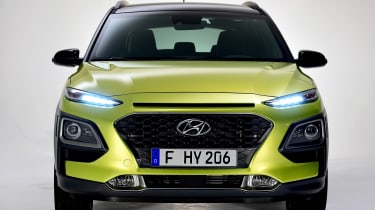 From £17,495, the same powertrain can be had mated to SE trim. This trim level introduces larger 17-inch alloy wheels, roof rails and fog lamps. In the cabin, the steering wheel and gear knob are wrapped in leather, while the driver’s set gain electric lumbar support. Rear parking sensors and a rear parking camera also feature, alongside a larger seven-inch touchscreen infotainment system with Apple CarPlay and Android Auto.

Premium trim starts from £18,795 and cuts another new look thanks to 18-inch wheels, silver skid plates and a chrome grille surround. In the cabin, climate control with automatic defog is also included, alongside automatic wipers, keyless go with a stop/start button, an upgraded eight speaker audio system, and an eight-inch touchscreen infotainment display with sat nav. Buyers can step up to Premium SE too, from £21,195. Additional convenience equipment is the headline act, with blind spot detection, autonomous emergency braking, a head-up display, front parking sensors and power folding mirrors.

Buyers after the 1.6-litre petrol engine with all-wheel-drive will have to fork out £24,995 for the Kona Premium GT. Full LED headlights with high beam assist and LED taillights are included, while the driver information display in the instrument cluster expands to 4.2-inches. Pedestrian recognition is added to the car’s autonomous emergency braking feature. 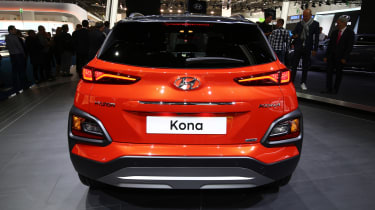 The bold looks are something new for Hyundai. Up front, the Kona has a large hexagonal grille, a Citroen-style stacked headlight design and traditional black body cladding. A short rear overhang and low roofline create a distinctive shape, while the car's contrasting details and standard roof bars give some added SUV appeal. “We know we are late to the segment,” head of product management Raf Van Nuffel told us at an exclusive event ahead of the car’s official launch. “So we needed to make a bold statement with the design.”

Inside, the cabin is more like its i20 counterpart, as it has a very grown-up feel. Van Nuffel told Auto Express that one key to Hyundai’s success in Europe is that the interiors of its cars have been kept consistent. As well as looking similar to the i20, there are also plenty of features that are recognisable from the i30 hatchback. However, the Kona does get some flashes of bright plastic trim that match the car's exterior colour. 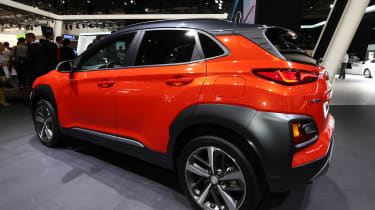 Other tech from the i30 includes the eight-inch touchscreen sat-nav system on higher spec cars, and this will come with free map updates for 10 years.

The Kona is the first Hyundai to feature a head-up display: an eight-inch panel flips up to place speed and other driving data directly in the driver's line of sight. All cars get a trip display between the dials, and this will be a 4.2-inch TFT screen on top-spec cars.

Just two petrol engines will be available at launch. The first is the 1.0 T-GDi three-cylinder turbo found across the Hyundai range. Here it comes with 118bhp and 175Nm of torque. It will have a six-speed manual gearbox and front-wheel drive. The other engine is a 175bhp 1.6 four-cylinder with a seven-speed DCT dual-clutch auto and four-wheel drive. It promises 0-62mph in 7.9 seconds. The target economy figures are 38.7mpg for the 1.6 and 53.3mpg for the 1.0.

A 1.6 CRDi diesel will be added to the range shortly after launch with 113bhp or 131bhp. The lower-powered car is manual and front-drive only, but the more powerful auto-only model can be ordered with front or 4WD.

Instead of torsion beam rear suspension, the Kona uses a more complex multilink set-up, plus a system called Advanced Traction Cornering Control that improves traction and damping in bends. 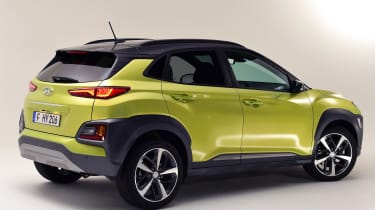 Hyundai is also considering EV versions, and the Kona’s platform will support some sort of electrification. Van Nuffel said: “Hyundai is a pioneer of the hydrogen fuel cell, but there’s also the Ioniq with three alternative powertrains. Of course there is more to come from EV from us.”

At 1,800mm wide, 1,550mm high and 4,165mm long, the Kona is slightly longer and wider than the Juke, but it’s not quite as tall. The longer wheelbase means it’s bigger inside, however, while the 361-litre boot is slightly larger than the Nissan’s 354-litre load bay.

What do you think of the new Hyundai Kona? Let us know below… 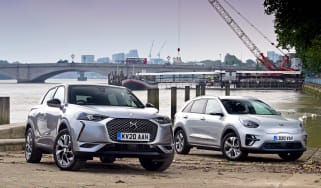 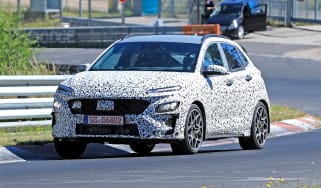