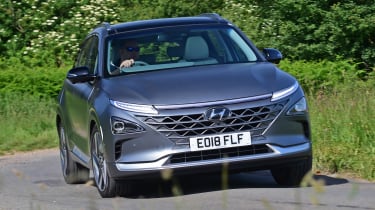 Hyundai’s second-generation fuel cell SUV has moved the game on significantly. It’s an attractive and usable package with efficiency at its heart and strong tech to boast of. It’s still hindered by price and filling infrastructure, but gives a strong indication of how appealing hydrogen power could be if those two issues could be solved.

Spend time with Hyundai’s fuel cell experts and, while many may disagree, you come away convinced that hydrogen and fuel cells will play a big part in the future of our cars.

The Koreans are ploughing on with the tech, however, and are putting ever-more appealing hydrogen-powered cars into production. The Nexo is the firm’s latest offering, and we came away impressed after an hour driving a pre-production version around London.

• Do hydrogen fuel cell cars have a future?

The Nexo follows the ix35 FCV, and Hyundai hopes that continuing the SUV theme will work in its favour. Filling it with the latest connectivity and autonomous tech should help, too. 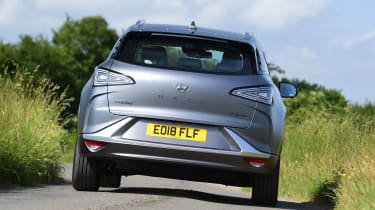 As SUVs go, it’s a looker; with sleek lines and pop-out door handles, attention-grabbing LED lighting and clever aerodynamics all turning heads as we drove around the city’s streets.

It’s even smarter inside, with a large central 12.3-inch infotainment screen and a seven-inch display ahead of the driver. There’s some cool metallic switchgear on the floating centre console and high quality eco-friendly plastics throughout. We’re not a fan of the light grey colour scheme, though.

There’s plenty of space inside, too. At 4,670mm, it’s nearly 200mm longer and a smidgen wider than Hyundai’s Tucson SUV – that equates to excellent leg, head and shoulder space in the front and back for adults of above-average size. And unlike the fuel-cell ix35 it gets a proper boot with 461 litres of space, plus folding rear seats with a flat load area.

With hydrogen reacting with oxygen in the fuel cell to create electricity, you won’t be surprised to hear that driving the Nexo is pretty much like driving many other electric cars: quiet and relaxed.

It’s much more hushed than the iX35 it replaces thanks to the slippery shape and a smaller, more efficient drive system, while reductions in weight have benefitted ride and handling, too.

It still feels quite heavy on the road with a ride that isn’t as settled as you’ll find in a Tucson; it’s not uncomfortable, but we were well aware of London’s iffy road surfaces. The steering is alert enough, but this is a hydrogen-powered SUV not a sports car. And if you like to let the tech do some of the work, lane keeping aids and adaptive cruise will mean the car will drive semi-autonomously.

One of our favourite features was the blind-spot view monitor; it displays a view over your shoulder from a camera in the side mirror on the dash when you indicate. It’s handy and quite cool, though can’t quite replace a quick look to the left! 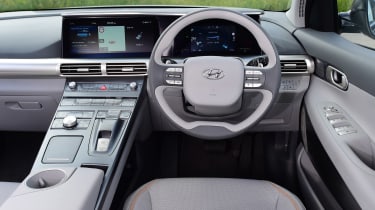 There’s a host of other tech to have fun with, too, but the Nexo won’t leave you grinning like some EVs with their point-and-squirt acceleration; it’s not especially quick. The electric motor produces 161bhp and 395NM of torque so 0-62mph is covered in a genteel 9.2 seconds.

To put that into context, a 175bhp 1.6-litre petrol Tucson will just beat that acceleration and have a range of 512 miles based on a claimed average fuel economy of 37.7mpg. The Nexo claims a similar 497-mile range with its three hydrogen tanks holding 156 litres of fuel – costing around £80 to fill. Of course, the petrol Tucson emits 165g/km of CO2 and the Nexo precisely nothing; it will actually clean the air as it drives.

No matter how good the Nexo is (and it is good), there will always be two Achilles’ heels: price and where you can fill it up. The latter is a political subject that Hyundai can only lobby on. It’s still very much an issue in the UK; there just aren’t enough places to fill your Nexo with hydrogen.

As for price, we expect it to sit around the £55,000 mark once the government grant is taken into account. That’s expensive, for sure, but the Nexo is a much more enticing proposition than the iX35 ever was. It feels like a genuinely premium product that could probably justify a price in the region of £45k. But that’s still the price you pay to be at the cutting edge of future technology.