A Pininfarina-styled Jaguar XK120 SE has been restored for Pebble Beach. We chart the story of the man behind it… 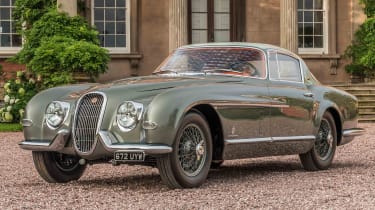 On the same day the Jaguar D-Type lost its crown as the most expensive British car ever sold at auction - a title that now belongs to a $22.5m Aston Martin DBR1 - Classic Motor Cars revealed a machine that could one day rob the D-Type of its status as the world’s priciest Jaguar as well.

Originally built in 1954, the XK120 SE was delivered to a man who then tasked Pininfarina with giving the Jag a little Italian flair. The result was unveiled to the world at the 1955 Geneva Motor Show, but a short time later it fell off the radar and for decades afterwards it was frequented by private collectors.

However in 2015 it was purchased by CMC, who intended to restore it to its former glory. Over the two years that followed 6,750 hours were poured into bringing the best out of every inch of the XK120, with the new owners even employing 3D printers to recreate the original headlights.

After a painstaking effort, the beautifully finished Jaguar has now been displayed to the world once again at this year’s Concours d’Elegance at Pebble Beach in California, where it finished in a very respectable second place in the O-2 Postwar Closed class. 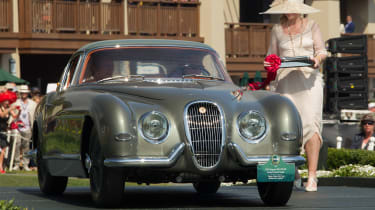 Perhaps more interesting though is the man behind the push to restyle XK120 all the way back in 1954. His name was Maximilian Hoffman, a businessman who can be indirectly credited with some of the finest vehicles to emerge in America from Europe in the middle part of the 20th century.

Sacrificing his racing career to escape growing Nazi influence in his younger days, Hoffman left Austria behind and started along a path that would see him shape the future of the automotive world. By 1948, he had accrued enough resources to start his own business importing Jaguars to his showroom in New York, acquiring the rights to sell Volkswagens a year later.

But following the war, VW’s main product was the Beetle, which could not hope to compete with the automobiles coming from American giants such as Ford and Chevrolet. Hoffman realised that there was money to be made importing more up-market European cars to satisfy his wealthier clientele, so he secured a deal which allowed him to import cars from Mercedes.

As an ex-racing driver the 300SL caught his attention due to its impressive and consistent success at the time, but initially Mercedes-Benz weren’t interested in producing a road-going version. Max then decided to make an offer the German car maker couldn’t refuse, placing an order for 1,000 cars, which kickstarted the 300 SL Gullwing.

Hoffman was not done there, as his request for a cheaper, more engaging Porsche 356 led to the 356 Speedster. There was a similar story with the 1955 Alfa Romeo Giulietta Spider, which again may never have come to fruition without his suggestions.

After that the BMW 507 roadster and BMW 2002 followed, both coming as a direct result of Hoffman’s input. The large success of BMW in the USA convinced the German marque they needed to import the cars themselves, eventually buying Hoffman out.

Hoffman retired in 1975 as one of the wealthiest men in America before passing away six years later. In recognition of his impressive career and the many contributions he made to the motoring world, he was admitted into the Automotive Hall of Fame in 2003.

Which of the cars Max Hoffman helped shape was the best? Let us know in the comments!