62-years later, the 25 Jaguar D-Types that never were will be built 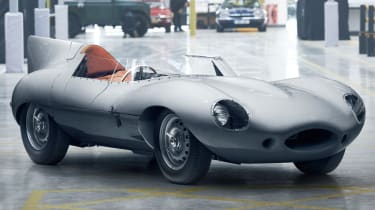 Following a 62 year wait, Jaguar is fulfilling its original production run of the iconic D-Type with 25 new examples being built by the Jaguar Land Rover Classic team. Buyers will have the option of 1955-specification Shortnose or 1956-spec Longnose bodywork, but as with previous continuation models, prices are expected to be well in excess of £1m.

Despite the original D-Type not reaching its full production potential, it achieved great motorsport success, winning the prestigious Le Mans 24 Hours race not once, not twice, but three times between 1955 and 1957.

The racing success can in part be attributed to the six-cylinder XK engine, synchromesh gearbox, advanced (for the time) disc brakes and Dunlop alloy wheels, which were chosen for their additional strength over contemporary wire wheels. The ‘new’ D-Types will be recreated exactly to original specification, including the power output of around 250bhp and potential top speed of 190mph (dependent on which gearing is installed).

The #Jaguar D-Type is returning after a 62-year hiatus, with a new 25-strong run expected to cost in excess of £1 million each: http://aex.ae/2GWZo8U

There is currently only one ‘new’ Jaguar D-Type model in existence, an engineering prototype Longnose featuring the extended bonnet, tail fin behind the driver’s head, wide-angle cylinder head and quick release brake calipers. The high levels of attention to detail are reflected in the fact that it takes around 7,000 man hours to build one D-Type.

Many of the 25 units available have already been sold, and if trends with previous Jaguar continuation models are to be believed, the remaining units will be gone in no time.

Which is your favourite Jaguar Land Rover Class continuation model: the D-Type, XKSS, or Lightweight E-Type?