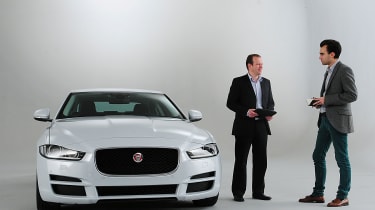 Jaguar has officially started production of the long-awaited XE following the brand's multi-billion pound investment into R&D and production at its Midlands plants. Production of the BMW 3-Series rival will take place at Jaguar's Solihull plant and it becomes the first ever Jaguar to be assembled there, with the site formerly known as the 'home of Land Rover.'

The XE, alongside the F-Pace SUV due next year, will be built in Jaguar Land Rover's West Midlands plant. As a result, Jaguar claims UK based suppliers have been awarded £4billion in contracts to support the production of the all-new saloon, with these home-grown suppliers providing up to 55 per cent of the car¹s components.

Production at the Solihull plant has almost trebled in the last five years, with the workforce doubling to almost 32,000 in that time period too. The XE and forthcoming F-Pace will be built alongside the entire Range Rover product portfolio, with Jaguar predicting to sell in excess of 100,000 XEs globally per year. 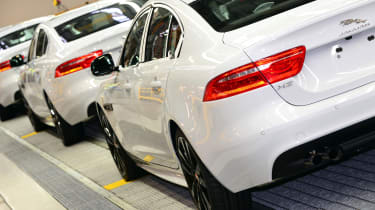 The start of production also marks the official opening of Jaguar's 'factory within a factory' in Solihull. A £500 million investment at the site has given birth to Europe's largest aluminium body shop at 165,000m2, ­ the equivalent to 12 football pitches. This follows Jaguar's £1.5 billion investment into its aluminium vehicle architecture.

Elsewhere at JLR, a £600million cash injection was centred around the Castle Bromwich Advanced Manufacturing Plant where Jaguar assembles its range of vehicles- with the exception of the XE. The bulk of the investment Castle Bromwich is for a £320million state-of-the-art aluminium bodyshop. It's the largest single financial boost the plant has ever seen.

The rest of the funds will be centred around the firm's Advanced Design and Development Centre in Whitley, and a new National Automotive Innovation Centre opening in 2017. The money is primarily intended to increase capacity in order to build the new XE and all-new XF saloon, as well as the F-Pace and Jaguar's all-new 'Ingenium' diesel engines. 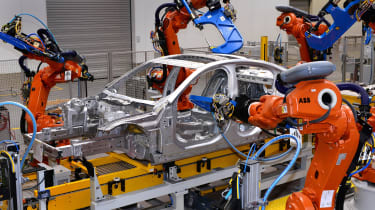 The number of cars produced at Castle Bromwich has nearly doubled in five years, totalling 81,470 in 2014, and this commitment in the UK means that the now Indian-owned brand firmly intends to plant roots here for decades to come.

The ADDC centre in Whitley, Coventry will also see its operational output double in the coming weeks, where efforts will centre around the exploration of new technologies in ultra-low-emissions vehicles, including the Jaguar XE-E and further placement of Ingenium engines in Jaguar and Land Rover models.

Are you happy to see JLR investing this money in the UK car industry? Let us know your thoughts in the comments section below...